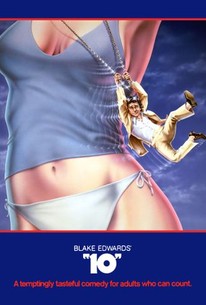 Blake Edwards' 10 stars Dudley Moore as George, a Mancini-type songwriter. Approaching middle age, George feels as if life is passing him by, especially his sex life. Despite the presence of longtime lady friend Sam (Julie Andrews) in his life, he becomes obsessed from afar with Jenny (Bo Derek), who is engaged to be married. Following her to Mexico without her knowledge, George arranges a meeting with Jenny by saving the life of her fiancé, David (Sam Jones). Once he has made her acquaintance, George suddenly finds himself faced with the realities of embarking on such an affair. Beyond renewing the popularity of Maurice Ravel's "Bolero" and turning Bo Derek into a star, upon its release, 10 was one of the most financially successful Blake Edwards films in years. ~ Matthew Tobey, Rovi

Burke Byrnes
as Himself

John Chappell
as Man on Beach

A sporadically funny, marginally interesting fiasco that might have evolved into a memorable romantic comedy.

Blake Edwards's 10 is perhaps the first comedy about terminal yearning. Like all great comedies, it deals with emotions very close to our hearts.

'It's probably the writer/director's best film outside of the Pink Panther movies, and the portrait of the artist as a dirty aging man is one that still resonates today.'

It has some gags - some are even quite funny - but not nearly enough.

A fascinating character study, bittersweet and insightful yet full of tremendous laughs.

10's tossed-off quality keeps it from greatness, but it also distinguishes it from the great mass of contemporary comedies smoothed to a shiny, edgeless formula. [Blu-ray]

This passable but not great Blake Edwards picture became known for the huge impact that the beautiful Bo Derek had on hairstyle; Bo's stardom was shortlived, though.

People tend to forget what a hilarious movie this really is

"10" explores sexual yearning in a drama that is both funny and right on target with its depiction of the yearnings of men.

Sexist, juvenile, and pathetically structured, despite the gamest efforts of its actors and the blithe willingness of its famous non-actor.

It was a big hit. I have never understood why.

It is surprising that this excellent film is so underrated and has never been appreciated as it should be. Dudley Moore is a great actor and a great comedian, and this is a hilarious story that takes a very honest look at the middle age crisis and inchoate yearnings.

Wow, I saw this such a long time ago, I barely remember it, I should see it again, maybe it's better than I think?

A nice comedic melodrama with some good performances. It's not as good as some have hailed it as being, but it's good enough for a watch every once in a while. As far as cinematic midlife crises go, stick with American Beauty. It is rather dated, but because it is, it actually provides a nice look at the sexual excesses of an era before the AIDS pandemic- which I kind of liked.

I really enjoyed this film - the whole dream thing for Dudley followed by him actually managing to pull this lovely young thing... it's the stuff of dreams! It also shows that you should never give up on your dreams, but also that dreams are often better than reality (hence he ended up not going through with it) - it's a quality film that deserves more showings on TV than it gets! Of course the gratuitous nudity helped pass along the more boring moments.. and which red-blooded male wouldn't do as Dudley does? Telescopes are definitely NOT useless during the day despite what Patrick Moore might say! So, for sheer eye candy, coupled with getting an ugly man an attractive girl, this film is great to watch - plus it has many comic moments too of course! Marvellous!