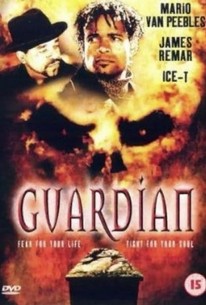 When the movie opens, John Kross (Mario Van Peebles) is a U.S. soldier on a covert mission deep inside Iraq on the eve of the Gulf War. What he sees from behind a sand dune is some sort of mysterious excavation, but things go badly and Kross is discovered and wounded. He awakens with vague memories of a baby being born and stolen -- and with hideous symbols carved into his torso. Years later, as a detective for the L.A.P.D., Kross' episode catches up with him when Tel-Al, an invisible, body-shifting supernatural entity, arrives in Los Angeles to claim the stolen child, now a young boy. Meanwhile, Kross is dealing with stopping the flow of a new street drug called Chaos, which is being sold by a malevolent disco owner (Ice-T) and is also connected to the Iraqi excavation that unloosed the evil spirit. The demon takes over Kross' partner's body (James Remar), just as Kross discovers the whereabouts of the boy who is "the chosen one."

[N]ot even a resurrected Eazy-E could make Guardian worthwhile.

...it's movies like Guardian that give straight-to-video movies a bad name.

Watchable, enjoyable, and even compelling.

There are no featured reviews for Guardian at this time.