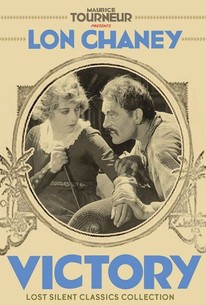 Axel Heyst (Jack Holt) is taught bitter lessons by his father -- that pity is contemptible and sympathy is useless. So the young man intends to exile himself to an island, but he winds up bringing along Alma (Seena Owen), who he has saved from unhappy circumstances. Even more complications arise when hotel proprietor Schomberg (Wallace Beery), who is jealous of Heyst, sends a group of crooks after him. The arrival of these evil characters, led by Ricardo (Lon Chaney), inspires Heyst to drop his father's philosophies and save the girl. This story was based on the novel by Joseph Conrad, but -- as is all-too common in the world of cinema -- instead of the book's tragic ending (both Alma and Heyst died), the pair live happily ever after.

Falls off after a creatively directed opening 20 minutes.

There are no featured reviews for Victory at this time.