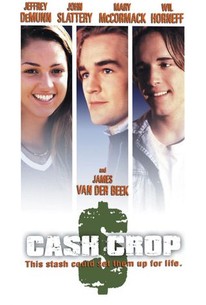 Andy Yates (Wil Horneff) was born and raised in a farming community in rural Pennsylvania, where people know each other and value hard, honest work. Andy discovers that his seemingly conservative parents (Jeffrey DeMunn and Lisa Emery) have managed to hold on to the family farm through a secret source of income -- in addition to the food crops that have been their livelihood for generations, they're growing marijuana and selling it at a considerable profit. The Yateses are not the only family in the area raising pot in order to pay the bills, and in time the town sheriff (John Slattery) is visited by a DEA investigator (Mary McCormack) who is trying to ferret out the local drug growers. As Andy is forced to resolve his feelings about his parents' double life, the sheriff has to decide whether his greater loyalty lies with the law or with the friends and family he's known all his life. Harvest features a brief appearance by James Van Der Beek, who became a teen heartthrob with his roles in the film Varsity Blues and the TV series Dawson's Creek.

There are no critic reviews yet for Harvest (Cash Crop). Keep checking Rotten Tomatoes for updates!

There are no featured audience reviews yet. Click the link below to see what others say about Harvest (Cash Crop)!