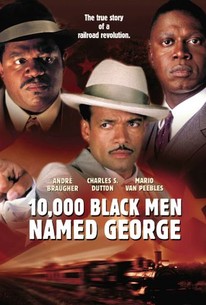 The Showtime cable network's contribution to Black History Month, 2002, was the powerful filmed biography 10,000 Black Men Named George. Andre Braugher (who also executive produced) stars as legendary African-American labor organizer Asa Philip Randolph. The story begins in the 1920s, a time when being a railway Pullman-car porter was one of the few jobs open to black men. It was bad enough that the job paid starvation wages for impossibly long hours; even worse was the fact that white train passengers were encouraged to patronizingly refer to each and every black porter as "George," in honor of sleeping-berth maven George Pullman. After the death of a young porter who'd saved the life of a white passenger, coupled with his own humiliating experiences in a porter's uniform, Asa Philip Randolph agrees to help organize the porters into a union -- a task at which he has already failed in six previous instances with six different occupations. Although Randolph has strong support from friends, family, and a handful of white political activists, his mission may well be doomed from the start, thanks to the brutal strikebreaking tactics of Pullman Company head Barton Davis (Kenneth McGregor) and Davis' legions of paid hooligans and bought-off politicians. In fact, it would be 12 years before Randolph's union would finally see the light at the end of the tunnel -- and even then there would be rough roads ahead. Also in the cast are Mario Van Peeples and Charles S. Dutton as Randolph's allies and fellow porters Ashley Totten and Milton Webster, and Brock Peters in a rare unsympathetic role as a traitor in the union's midst. 10,000 Black Men Named George made its American TV debut on February 22, 2002.

Andre Braugher
as A. Philip Randolph

Harve Sotoloff
as Board Member

Darren Josephs
as Porter in Back

Herbert Johnson
as Other Porter

In a Black History Month of remarkable television, add André Braugher as [A. Philip] Randolph...

There are no featured audience reviews yet. Click the link below to see what others say about 10,000 Black Men Named George!