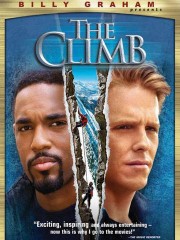 Barry W
½ May 6, 2015
Oh dear. So many problems with this movie. Where to start?
The Story: The story was predictable, and I think I saw every single plot twist coming.
The acting: Ooooooooh it's awful.
The morale: It's about as subtle as having an anvil dropped down your throat.

Jerry H
½ September 19, 2012
I'm not a huge fan of rock climbing, but, as an entertainment lover, I find that a good yarn, be it cinematic, literary, or otherwise, can be interesting even if the subject matter by itself may not be. "The Climb" is the story of two mountaineers who are able to fulfill a lifelong dream: climbing a notoriously treacherous mountain in Chile. To do that, though, they have to overcome their personal issues, both with each other and the world around them.
What was great about the film? The story, scenery, and acting, for starters. "The Climb" is a Christian film, and, though faith in God is openly discussed, it isn't presented ridiculously, as it was in "C Me Dance". As a Christian, I'm glad to see a well-made film that promotes such values; it largely has the feel of the Kendrick brothers' movies: "Facing the Giants," "Fireproof," and "Courageous". On a more negative note, "The Climb" is definitely not for young children. Aside from the "thematic material" that the MPAA warned about, there is also peril, emotional intensity, and brief violence in this film. For this reason, it's hard to recommend it to anyone under eleven. Also, the built-in English subtitles had some rather egregious typos. The biggest complaint, however, is that, unless you're a rock-climbing fanatic, there's little to interest movie watchers in multiple viewings of "The Climb".
So, my thoughts? If you're looking for movies to add to your church's library, or need something to tide you over until the Kendricks make another flick, then this is definitely for you; however, most folks, including those in the latter category, should stick to renting it from their local library or video store.

John S
April 11, 2012
A classic. And that opinion has nothing to do with the fact that I directed it, and am proud of all who worked on it, and am trying to just get that audience rating up higher. Honest.

Hiram C
½ June 29, 2009
This was a thriller that built up to a climax of action and drama combined. Really makes you think about what's really more important. Did they mention that Clifton Davis has a role in this, too?

Ginger B
March 2, 2009
This movie is of higher quality than that of some independently produced Christian movies. It also contains the lesson that unfortunate situations can be used for the growth and good of ourselves/others.

Nathan H
January 22, 2009
Not as heavy handed as you might expect, you might be able to trick a non-Christian into finishing it (but I doubt it). Also, the production value is very good for this type of movie. A bit overly dramatic at times, but I feel it hit the right notes when it counted. 10x's better than that "Facing the Giants" movie.

Cara G
½ January 4, 2009
Good messege. Still quite cheesy, mainly because of the script. Some acting issues with suppoting actors. I applaud them for at least trying to go deeper than many Christian movies do, i.e. the girlfriend being a Christian, but caught up in sin, etc. Cinimatography was quite good. Overall this movie was a step in the right direction as far as Christian movies are concerned, but the industry needs more skilled professionals and shoot for a higher quality of film. Hire convincing actors who are actually good at acting, hire better screenwriters, etc. Bring quality as well as a good message to Christian Film.

July 12, 2008
This movie show the power of god and how he can change anyone in any circumstance whether good or bad. I recommend this to everyone i know!

Private U
June 5, 2008
A real great Christian film but might need some tissues.

Love is a Long Shot
May 19, 2008
This has a great message! Everyone should watch this movie.

Private U
January 14, 2008
Awesome movie! This is one of my very favorites.