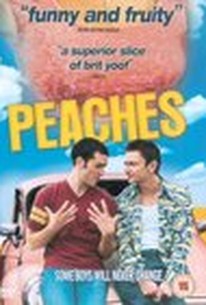 In this comedy, Frankie (Matthew Rhys) is a luckless loser who can't hold on to a job and isn't sure what to do around Cherry (Kelly Reilly), the woman he loves, even though she's more than interested in him (and makes no secret of it). Cherry decides to take matters into her own hands and invites Frankie along for a weekend getaway in the country, but Frankie isn't sure how to handle this sudden burst of good fortune. Two of his buddies, Pete (Matthew Dunster) and Johnny (Justin Salinger), insist on loading him down with "helpful" advice, while Pippa (Sophie Okonedo), one of Frankie's former significant others, turns up just in time to make things difficult for the already befuddled Frankie. Though set in London, Peaches was produced by Irish talent and had its world premiere in Ireland; in 2000, it played at both the London and Cork Film Festivals. ~ Mark Deming, Rovi

There are no critic reviews yet for Peaches. Keep checking Rotten Tomatoes for updates!

There are no featured reviews for Peaches at this time.