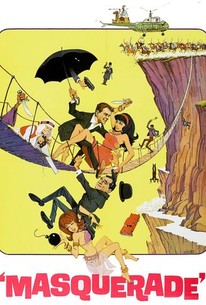 David Frazer (Cliff Robertson) is the down-and-out soldier of fortune hired by the British Foreign Office for a mission with retired Colonel Drexel (Jack Hawkins) in this spy spoof. Their mission is to kidnap the Middle Eastern Prince Jamil (Christopher Witty) and hold him for a few weeks until his 21st birthday so he can legally sign an oil trade agreement favorable to Britain. David is beaten by enemy secret agents posing as clowns in front of a capacity crowd under the big top. The duo also must wend their way through a dark, mysterious castle where danger lurks with every turn. Hawkins has obvious fun spoofing the stiff and proper Brit character he was often called on to play throughout his career.

Anthony Singleton
as His Assistant

James Mossman
as Himself
View All

Not great by any means, but a film with more than its share of imagination and style.

Part of the problem is that its satiric edge is rarely sharp enough.

Masquerade is also pretty frank about its origins...none of it is as convincing, as inevitable as the plots bottled in Bond.

In a period in which the screen has been frilled with nonheroes, Robertson is delightful as a nonhero in heroic situations.

There are no featured reviews for Masquerade (A Shabby Tiger) (Operation Masquerade ) at this time.