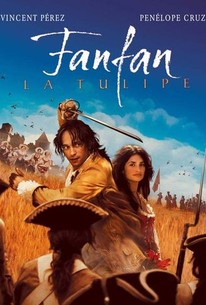 Directed by Gérard Krawczyk, Fanfan la Tulipe is a remake of the classic 1952 swashbuckling satire by French director Christian-Jaque. Set in the 18th century, Vincent Perez plays the title role of the seductive swordsman Fanfan, who flees his home in order to avoid a forced marriage. A gypsy girl named Adeline (Penelope Cruz) tricks him into joining the army of King Louis XV (Didier Bourdon) by telling him that if he fights, he will get to marry one of the king's daughters. In addition to producing, Luc Besson co-wrote the adapted screenplay. Fanfan la Tulipe premiered at the 2003 Cannes Film Festival.

It's all Penelope Cruz can do -- short of being fired out of a cannon -- to keep up with the action.

It wanders sadly through routine action sequences, mixing slapstick with derring-do yet never generating any wit or romance.

There are no featured reviews for Fanfan La Tulipe at this time.