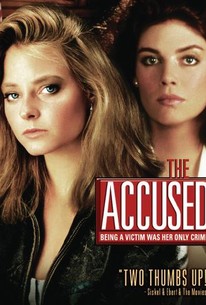 Simultaneously gut-wrenching and provocative, The Accused follows the struggle of a young woman to find justice after she is publicly gang-raped in a local tavern. While it seems a straightforward enough case, there are some complicating issues involving the character and intent of the victim herself and also the culpability amongst those who witnessed the crime and did nothing to stop it. Sarah Tobias (Jodie Foster in a mesmerizing Oscar-winning turn) is a hard-living sexy little fireball who loves to party with her friends. The night of the rape, she had a fight with her boy friend and so goes to the bar to blow off a little steam. In the dark back room where the pool tables sit and pinball machines flash dimly against the walls, Sarah begins casually flirting, dancing around, drinking a bit and the next thing she knows she is tossed upon a pinball machine being brutally ravaged with guys lined up to have their way with her while other patrons stand around cheering. Badly beaten and traumatized, she ends up in the DA's office facing attorney Kathryn Murphy (Kelly McGillis) who listens and takes the case. But as Murphy learns more about Sarah, she becomes less pleased, for Sarah has a long, checkered past of drugs, booze and casual acquaintances that the defense can easily use to destroy her character. Rather than risk that, Murphy goes for a plea bargain that grants the guilty light sentences and frees them from having to admit that they committed rape. Sarah goes ballistic when she hears about the trial and harshly derides Murphy. The lawyer seems unsympathetic at first, but then she sees first hand the devastation the rape has wrought upon Sarah's life and decides to defy her bosses and continue fighting for justice using an entirely new tack. This time, instead of going after the rapists, she is going after the "passive" onlookers who may or may not have encouraged the crime. The Accused is loosely based upon the true story of a much-publicized 1983 case from New Bedford, Massachusetts.

Critic Reviews for The Accused

The Accused demonstrates that rape victims often are suspects in their own cases.

This film about sexual assault, written by Tom Topor and directed by Jonathan Kaplan, is not just about a gang of rapists, the perpetrators, but also about the callow and craven men who cheered on the penetrators.

It compares very favorably with movies like The Good Mother, in which bad girls/sexual women make their bed, of nails, and are then told they better bloody well lie in it.

Kelly McGillis can make little of her underwritten role; economy is commend-able, but a woman in all her complexity cannot be represented by a pair of outsize shoulder-pads.

This performance didn't just win an Oscar. It won the hearts of every woman who has ever had to endure the horror of assault and the continued injustice of having to fight against prejudice and a legal system steeped in patriarchy, to be heard.

Possibly the best performance Foster has even given, and the best of its type

In her first Oscar role, Jodie Foster's gang-raped waitress transforms from a good-time hard-drinking girl to a woman fighting for the self-esteem she never had.

...the movie's certainly worth seeing, if only for Foster's award winning performance.

A sobering and seriously well-acted tale of rape and retribution.

Audience Reviews for The Accused

Jodie Foster delivers the goods and how (a shotgun in your face, think young Brando's Kowalski) as a white trash waitress who is cruelly victimized and so must fight for her human dignity. Released in 1988 this one is beginning to show it's age but Foster's performance keeps everything else glued together.

Jodie Foster & Kelly McGillis' empowering performances shed light on a dark and difficult story. The Accused is gut-wrenching and somewhat unbearable to view that it leaves its audience speechless, emotional and cautious of this heinous action/situation that still occurs to this day. 4/5

It's an important film with an important message. In terms of quality, better courtroom dramas have been made, but the film succeeds due to the performances, the power of the story, and the grace in which it is presented.

A painfully uncomfortable subject matter and several very shocking scenes make "The Accused" one of the more explorative and unpleasant big budget films. There is nothing truly exploitative to this film, though it does have an explicit rape scene and does deal with a character who is angry, strong, and difficult to sometimes understand. Jodie Foster plays Sarah Tobias, a blue collar working girl who typically does many drugs and drinks, all the while being easy on the eyes, if you catch my drift. In the midst of a beer soaked poolroom she gets raped, and the experience only makes her angry and out for revenge. Her thoughtful rage and ambitious sentiment for justice is very pivotal to the film, because unlike many films dealing with this issue, the victim isn't curled up in a ball, cursing the world and yet staying immobile. This is a hopeful film, about recovery and being strong in the face of a life changing tragedy. In one of the most demeaning scenes, with the most horrific circumstances, they show the true travesty of her situation, but only after they show the way everyone treats her because of who she is rather than what has happened to her. In the rape culture climate of today, this film is still vitally important, and though it's sad to see that this film is not of its time, it is also uplifting. Kelly McGillis plays her laywer, Kathryn, who at first doesn't want the case because she knows she can't win it, but eventually becomes Sarah's saving grace. The contrast between the suave lawyer just trying to win justice for her client and the world around them, telling them they don't care, was poignant and very upsetting. I don't want to say this was a beautiful film, but it sways opinion whenever it's watched, and truly embodies our judicial system.