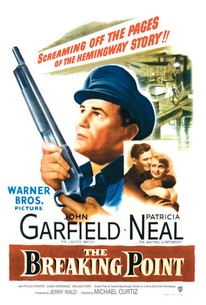 In this taut adaptation of Hemingway's To Have and Have Not a financially struggling charter-boat captain finds himself in deep and turbulent water when he is forced to get involved with smugglers after a dishonest millionaire cheats him out of pay during a fishing excursion to Mexico; the louse also leaves his seductive girl friend, a hooker, stranded on the boat. The desperate captain agrees to illegally smuggle Chinese refugees into the US, but during the voyage, he is again double-crossed and must force his hapless passengers to jump ship when the Coast Guard suddenly appears. They take his boat away from him. Deeply depressed, he has sex with the abandoned woman and then goes home. Meanwhile, the crooked lawyer who talked him into smuggling the refugees, gets the captain's boat back and then blackmails him into taking a gang of crooks to Catalina Island. During the 26-mile voyage things come to a head when one of the crooks kills the skipper's first mate. Suddenly the captain snaps and he finally gets his revenge.

Len Hendry
as Boatswain
View All

Critic Reviews for The Breaking Point

The film's not great Hemingway. Few films based on his work are. But it's as close to this novel as we're likely to ever get in an adaptation, no matter who owns the remake rights, now.

Arguably the superior mounting of the Ernest Hemingway story, The Breaking Point proves moral gloom exists as equally and virulently sunny-side up.

The acting, script and direction (by Michael Curtiz) are first-rate, making it classic filmmaking.

Phyllis Thaxter steals the show. Her scenes are the best in the movie, and some of the best domestic scenes in cinema history. You don't often see a husband and wife on equal footing like this, nor do you see it this sexually charged.

It emerges as a strong, sardonic melodrama, more honest than most in its close-ups of human relationships.

The film is always interesting and often exciting, and Mr. Michael Curtiz has directed it in a tough and sullen style which is most effective.

Harry may be tough, but in Curtiz' hands he's basically a nice guy in noirland.

The insistence and courage of the film's final shot elevates it from a very good film to a nearly great one.

The Breaking Point adapts Hemingway's book and wrings out some genuine notes of solid tragedy, as well as a more nuanced performance from its lead actor.

Clearly the best movie adaptation of a Hemingway novel.

Audience Reviews for The Breaking Point

Superior performances in this rough well made film. In his second to last film, a much truer version of Hemingway's To Have and Have Not than the Bogie/Bacall film, Garfield is nothing short of brilliant making his early death and the loss of his talent all the clearer. Patricia Neal has one of her best if not the best role of her early Hollywood career and she's great as the been around wise girl who has a yen for Garfield. She and Phyllis Thaxter, also very fine, provide an interesting contrast as women who are miles apart but also similar in many ways. The fact that the two actresses share a resemblance helps make the point even clearer. Worth seeking out.