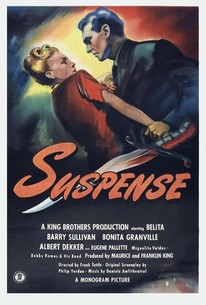 If Republic's skating star Vera Hruba Ralston could go "dramatic", so too could Monogram's skating star Belita. Produced by the enterprising King Brothers, Suspense takes place in an ice-skating emporium owned by Frank Leonard (Albert Dekker). No-good heel Joe Morgan (Barry Sullivan) not only strongarms Leonard into sharing the establishment's profits, but also tries to move in on Leonard's wife Roberta (Belita). The plot thickens when Leonard is apparently killed by Morgan, only to return from the dead! But what really does Morgan in is his own checkered past, as personified by his vengeful ex-sweetheart Ronnie (Bonita Granville, in a truly offbeat characterization). Belita's ice-skating solos (staged by Nick Castle) and Philip Yordan's overly complicated script tend to weigh down the proceedings; still, Suspense deserves to be seen, if for no other reason than its dazzling opening sequence.

Nestor Paiva
as Man with Blond

Dewey Robinson
as Man with Blond

Jack Lipson
as Man in Audience

Miguelito Valdez
as Himself
View All

Builds up to the promise of its title.

The heavy melodrama is suggestive of a nightmare.

There are no featured audience reviews yet. Click the link below to see what others say about Suspense!