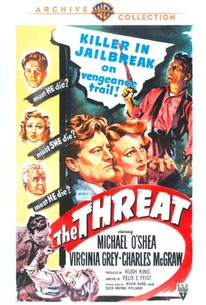 Homicidal criminal Charles McGraw busts out of jail, kidnapping the three people responsible for his incarceration. The hapless hostages include detective Michael O'Shea, district attorney Frank Conroy, and nightclub singer Virginia Grey. McGraw makes no secret of his plans to kill O'Shea and Conroy once he has successfully made a getaway; he has other plans for Grey, however, and for a while it seems as though she'll willingly play along with him. The cat-and-mouse game reaches its peak of tension some sixty minutes into this 65-minute thriller. Sparse and unpretentious, The Threat contained far more excitement than many a more expensive, star-studded film noir.

Critic Reviews for The Threat

... opens with a rat-a-tat energy, quite literally: a prison break, a whining siren, and then the almost unbroken blasts of machine gun fire...

'Kluger's out!' -- Those are the first words spoken, and they convey a sense of urgency that is pretty much sustained throughout the economical 66-minute running time of this taut deadline thriller

Audience Reviews for The Threat

There are no featured audience reviews yet. Click the link below to see what others say about The Threat!