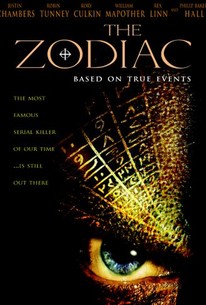 Critics Consensus: The Zodiac turns one of modern history's most enduringly fascinating true crime stories into a forgettable procedural with lackluster production values.

Critics Consensus: The Zodiac turns one of modern history's most enduringly fascinating true crime stories into a forgettable procedural with lackluster production values.

Critic Consensus: The Zodiac turns one of modern history's most enduringly fascinating true crime stories into a forgettable procedural with lackluster production values.

In the late 1960s, a police detective and his son become obsessed with a serial killer in northern California known as the Zodiac Killer, endangering their own family in the process.

A. Donald Cross
as Elderly Man

News & Interviews for The Zodiac

View All The Zodiac News

Critic Reviews for The Zodiac

The Zodiac has been made with the dunderheaded flatness of bad '70s TV.

It has the look of a straight-to-video movie, or at best a Project Greenlight production.

The would-be psychological thriller devolves into a plodding domestic drama.

The B-team version of the story.

Have the screenwriters ever studied the concept of arc, how characters evolve from opening to closing credits?

Treats the unfolding murder spree like a routine police procedural.

I hate to waste my time seeing what I know is an incomplete work. Good filmmaking and story telling, though.

Whether you're a true-crime buff or just an average cinephile who enjoys a well-crafted film, you'll find something to like about Zodiac.

The Zodiac case receded into limbo, and Bulkley's film ends on an inconclusive and profoundly unsatisfying note.

It's two, maybe three different takes on the same subject duking it out for airtime, and the resulting struggle only leads to boredom.

Though The Zodiac is filled with a strong premise and taut atmosphere, Bulkley hardly ever gives us a reason to care for Johnny or Laura.

A B-movie with just enough heft and factual accuracy to lull us into taking it seriously.

Audience Reviews for The Zodiac

As a culture we are obsessed with serial killers. While some writers choose to glorify these monsters, others simply want to show the truth behind their crimes and the investigation that followed. Unfortunately, in a lot of cases, the real story is no where near as interesting as Hollywood makes it out to be, that's where the based on a true story comes in. The case of the infamous Zodiac Killer was a fascinating case, of a man who not only killed at random, but who also taunted the police, by publishing cryptic ciphers in the newspaper, claiming if they cracked the ciphers, they'd know who he was. The man behind the crimes was certainly an interesting case, but the long investigation into finding out who the person might have been, was not. As a film, The Zodiac is said to be a fairly accurate portrayal of the crimes, the investigation, the paranoia than gripped the city, and the political pressure everyone faced as a result. The film makers didn't want to take liberties with the story, glorify the crimes, or present unproven theories from any one of the a number of books written about the Zodiac Killer. That being said, what happened was interesting, but also fairly slow moving and more than somewhat dry. For those people who are unfamiliar with the story of the Zodiac, they may enjoy learning about this case, but for those of us who know it, watching this film was like seeing a very long episode of the First 48. It's interest, the acting is suitable, and it passes the time, but if you're looking for a real entertaining, Hollywood version of the Zodiac story, you'll be much happier with the film simply titled, Zodiac, from 2007, starring Robert Downey Jr. That film is based on one of the more populist theories of the crime, and features more edge of your seat action than it's predecessor.

Not as in-depth or graphic as David Fincher's version of the Vallejo killings and this one got a little boring at times too. But overall I thought it was ok and watchable at least. I do enjoy fact-based serial killer movies and I've seen a fair few and this was far from being the worst of them.

Not to be confused with the David Fincher masterpiece, THE Zodiac is utter shit. It apes said genius's work in the most generic and unapologetic of ways--all from the "let's get this guy" cop pep talk down to the cliched "problems at home when the cop becomes obsessed with his work and misses his own birthday" scene. I can't really think of anything good to say about this movie aside from Robin Tunney's fleeting cuteness. I might not have minded it if I was sideways when I saw it, but since I was sober this movie is puke. Chunky, chunky puke.