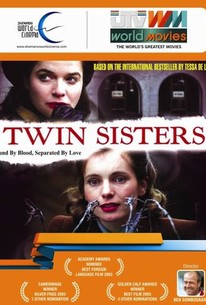 Dutch family-oriented filmmaker Ben Sombogaart directs De Tweeling (Twin Sisters), based on the best-selling novel by Tessa de Loo. Using black-and-white and color film stocks to establish the interwoven time periods, the story concerns twin sisters who grow up during WWII. In 1926, orphans Lotte and Anna are separated and forbidden to contact each other. Lotte is taken in by a wealthy Dutch couple to recover from tuberculosis and Anna is sent to work on a farm in Germany under the aegis of her uncle. Each woman becomes romantically involved with a different suitor; when the war breaks out, both sisters lose their men. The socioeconomic differences between their experiences drive them to opposite sides of the battlefront once war breaks out. Years later, they reencounter each other again and face the difficult prospect of a long-delayed reconciliation.

Barbara Auer
as Charlotte
View All

We have to settle for good intentions and bad writing.

Twin Sisters has the engrossing quality of a big historical novel and about the same level of sentimental artistry.

Twin Sisters has the what-will- happen-next energy of a page-turner.

Stamp collectors, this is the movie for you. For the rest of us, Lotte and Anna are nice but not very interesting characters,

It all feels a little too much saccharine and contrivance,

Go Dutch for this one.

Its production values are rich, [and] the performances of its three sets of actresses are strong.

This war film without a single explosion is about what war does to people's thinking and reasoning and how it leads to prejudice that can even break the bonds of sisterhood.

The good that comes from the deprivation of answers-on-demand is it allows a much stronger wallop once full disclosure has been made ...

In 1928, twin sisters Lotte(Julia Koopmans) and Anna(Sina Richardt) are orphaned and split up. Lotte, suffering from consumption, is sent to wealthy relatives in Holland to recover while Anna gets to stay and shovel cow manure. Even after Lotte gets better, no attempt is made to reunite the twins. By 1936, Anna(Nadja Uhl) and Lotte(Thekla Reuten) are old enough to start taking an interest in boys. Lotte is rather fond of David(Jeroen Spitzenberger) while Anna takes a liking to Bernd(Markus Von Lingen), a young Nazi, which so angers her uncle Heinrich(Ingo Naujoks) that he beats her severely enough for the pastor(Germain Wagner) to finally intercede on her behalf. While taking place on familiar ground, "Twin Sisters" adds a new spin with its Dickensian tale that seeks to explore identity when it is at its most important.(I was a little confused at first because Dutch and German sound similar to my untrained ears which might have been the point.) Through ignorance, Anna pays lip service to the Nazi party line but essentially remains a kind person. Along these same lines, the movie validates Bill Hicks when he pointed out how patriotism is linked to no more than where we are born. So while our fates may come down to a matter of timing, looking back on events may cause us to see a pattern that was never there in the first place.

Tear jerker all the way through. Vivid images, superb acting, beautiful heart wrenching story. Based on a famous Dutch novel, this filmed version was one of the five "Best Foreign Film" nominees for 2004's Academy Award. The two actresses who portray the twin sisters from late teens to early middle age are quite good, and the sets, costumes and WWII sensibility are wonderful. Good movie!

Based on the Dutch bestseller novel written by Tessa de Loo, the Oscar nominated "De Tweeling" is a magnificent movie. The dramatic story of these twin sisters, forced to a separation in their childhood, and following parallel lives due to WW2, is very sad, but never boring. I felt very sorry for the suffered character of Anna, and in the end I was sad with this touching and sensitive movie. Ben Sombogaard did a great job in shooting this movie of a popular Dutch book. The confusions and drama between the two sisters are the most important storyline. The war is only background.The performance of the unknown cast is amazing and this movie is a must-see. My vote is 5 stars.

This movie literally moved me to tears at the end, and I'm not generally a crier over movies. It does have a few holes in the plot, and the two actresses who play the sisters in their old age are frankly unconvincing as the older versions of the young women, particularly the one who played old Anna. But the rest of this movie is so beautifully done I could forgive it those few things. Nadja Uhl, in particular is fantastic. Both the actress and the character I found entirely believable and interesting. The grown up Lotte is less likeable, although Thekla Reuten does a fine job of portraying her, she is simply an irritating person! This movie kind of reminded me of Atonement in a way. Equally moving and also shows the effects of war on people's lives. If you like an epic story you can really get your teeth into, and don't miind reading subtitles, this one is highly recommended!