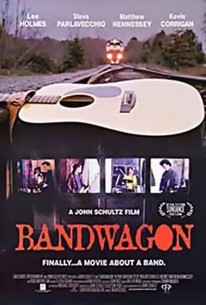 A group of hard-working, young North Carolinians amuse themselves in the evenings by forming a band. This ensemble comedy chronicles their experiences. Tony Ridge is the singer/songwriter. Though talented, he is so introverted that he can only play his music in a closet. After he loses his day job, his out-going friend Charlie Flagg suggests he try to become a professional musician. Tony decides to give it a go, but first they need a band. They choose stoner guitarist Wynn Knapp, who despite his perpetual drug-inspired haze is really good, and then the volatile Eric Ellwood as their bassist. Ellwood is extremely eager to get the money rolling in as he is deeply in debt to a big, mean loan shark. Unfortunately, the shark has Ellwood's bass. The four then stage a break-in and get it back. After practice, their band Circus Monkey is finally ready to perform. At least they think so and go to play at a frat party. Unfortunately they bomb because their music isn't hard enough for the rowdy, drunken kids. Undaunted, they continue on and eventually score themselves a manager with Linus Tate, a sage but quiet man. Together they set out across the South in hope of launching their careers, playing at any club that will have them.

K.D. Kennedy
as Himself

Marguerite Lowell
as Mona
View All

The band's perfectly mediocre pop (written and laid down by real musicians) accompanies a story that's both dramatic and hilarious.

A funny and rollickingly good movie about the challenges of keeping a band together on the road.

There are no featured audience reviews yet. Click the link below to see what others say about Bandwagon!