The Adventures of Tom Sawyer1938 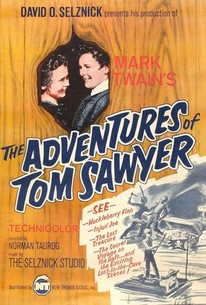 The Adventures of Tom Sawyer Photos

In a small town on the Mississippi River, the troubles of young Tom Sawyer (Kelly) are often due to his half-brother Sid (Holt) informing on him. When his Aunt Polly (Robson), with whom Tom lives, orders the boy to whitewash the fence, he manages to convince his friends that it's a privilege rather than a chore, and they take over for him. He's smitten by newcomer Becky Thatcher (Gillis), but she spurns him when he lies about knowing passages from the Bible. However, when Tom takes the blame for something she did, she sees him with new eyes. Tom and his rapscallion friend Huckleberry Finn (Moran) go to the graveyard one night, and see Injun Joe (Jory) stab a man to death, then convince drunken Muff Potter (Brennan) that he committed the murder instead. The frightened boys flee, and vow never to mention what they saw. When both Tom and Huck get into more trouble, they head for an island to play pirates, accompanied by their friend Joe Harper (Rentschler). when they realize the townspeople think they've drowned, they decide to watch their own funeral service, but soon come out of hiding. Later, at Muff Potter's murder trial, Tom decides to testify; Injun Joe flings a knife at him, and escapes. On a school picnic in a cavern, Tom and Becky are separated from the others, and find a treasure chest full of gold--but they also find Injun Joe, hiding in the cave. He tries to kill them, but falls to his death. Back in town, Tom and Becky are greeted as heroes.

May Robson
as Aunt Polly

Critic Reviews for The Adventures of Tom Sawyer

Routine, I would say...Huck Finn inadequate.

Tom Sawyer, which could easily have been ruined by inept handling, plus the hazards of technicolor and child acting, survives wonderfully in its present version.

Selznick's version of Mark Twain's famous novel is the first (and best).

Audience Reviews for The Adventures of Tom Sawyer

There are no featured audience reviews yet. Click the link below to see what others say about The Adventures of Tom Sawyer!

The Adventures of Tom Sawyer Quotes