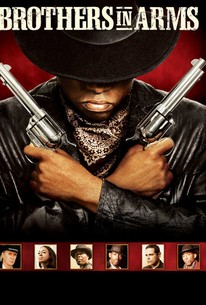 Principled gangsters take on a corrupt moneyman in this period Western. Robert Driscol (David Carradine) is a ruthless and power-hungry man who owns a small New Mexico town lock, stock, and barrel, and isn't shy about dealing with anyone who gets in his way. Linc Malone (Gabriel Casseus) and his brother Zane (Antwon Tanner) are a pair of African-American cowboys who've run afoul of Driscol and are looking for revenge. Linc and Zane put together a team of gunmen to rob Driscol's bank, but the heist goes awry when Driscol's men surround the building, and the gunfighters are trapped inside. Brothers in Arms also features Ed Lauter, Kenya Moore, and rapper Kurupt.

Peter Greene
as Burt
View All

It may be an "all-black" Western, but Brothers in Arms would have been pretty darn laughable with actors of any race, creed, or color.

Audience Reviews for Brothers in Arms

15/06/2010 (DVD) The cover looks cool, but the movie?... wasn't that cool, for me anyway. I won't mention any names this time in case it's someone's favorite actor/actress. There are some terrible actors that in my opinion spoil the movie and I'm glad it was $1 to hire, now I know why it was $1 to hire... for 8 days. I didn't die so I guess it's not that bad.