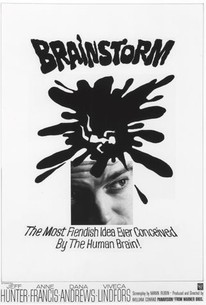 Brainstorm is a somewhat contrived but still well done and frightening thriller written and well-directed by actor William Conrad. Jim Grayam (Jeffrey Hunter) is a young scientist who saves Lorrie Benson (Anne Francis) from committing suicide. They fall in love, but Lorrie's husband Cort Benson (Dana Andrews), who had driven her to the brink of suicide before, discovers that Jim has had a history of mental instability and fabricates obscene phone calls and other actions to create the impression that Jim is unstable. The pair decide to murder Cort, using insanity as a defense. The film has a series of interesting plot twists and a plausible ending, and the performances are generally excellent with Conrad's direction maintaining a good pace and an excellent visual style aided by a good, simple musical score by George Duning.

Distinguishes itself by the depth of its exploration of insanity.