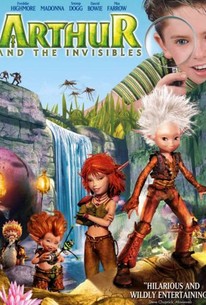 On the heels of his first foray into romantic comedy, versatile French filmmaker Luc Besson breaks new ground yet again with this computer-animated, family-friendly adaptation of his own children's book Arthur and the Minimoys. Arthur is a wide-eyed ten-year-old whose vivid imagination is fueled by the colorful bedtime stories his grandmother reads to him each night. His dreams are filled with images of African tribes and the remarkable inventions detailed in the enigmatic book that his grandfather left behind after mysteriously disappearing four years ago. Arthur and his family are in danger of losing their home to an unscrupulous real-estate developer, but if there is any truth to the tales of a treasure hidden deep beneath their garden and the tiny, fairy-like creatures that his grandmother so frequently sketches, there may still be hope of saving their home before it's too late. Now, with nothing to guide him but the clues left behind by his grandfather, Arthur will set out to find the mythical world of Seven Kingdoms, where the Minimoys are said to dwell, and ensure that his troubled family always has a place to call home. An imaginative children's fantasy in the vein of J.M. Barrie's Peter Pan, Arthur and the Invisibles features the voices of David Bowie, Snoop Dogg, Madonna, Mia Farrow, and Freddie Highmore. ~ Jason Buchanan, Rovi

Erik Per Sullivan
as Mino

Nathan Corddry
as Seides
View All

In a year when a lot of big-screen animation felt like it came rolling off the video game assembly line, a little originality goes a long way.

Strange and kind of meandering.

Here is an overproduced, oversugared semi-animated children's fantasy adventure from Luc Besson that made me want to cringe into my plush seat, never to re-emerge.

Besson's labour of love is a feast for the eyes but leaves the imagination distinctly undernourished.

Looks like European animation is still light years behind the US and Japan. Thank goodness for Highmore and Farrow - if only the whole film had been live-action.

Cute enough and cool enough at times that I would take all four of my nephews to see it, but minimal cute and cool isn't enough for the long haul.

Strangely, for a feature animation aimed at a younger audience, Arthur and the Invisibles is most entertaining in its live-action sequences.

Unquestionably original, watching Arthur and the Invisibles frequently feels like sitting in on an elaborate video game.

A candy-colored fusion of Dahl, Dr. Seuss and the director's own mischeviousness

Is it time for director Luc Besson to become invisible too?

In a clear-cut case of arrested development, the film that crowns Luc Besson's career is a magical phantasmagoria for the kids, and a derivative mess for their parents.

The movie seemed a little bit rushed to me. It's basically a good one for the kids. And the character "Maltazard" reminded me of "Voldemort" from Harry Potter. It's watchable. I like Freddie Highmore's accent. He always seems decent and into this sorta movies. Cute kid.

I thought that it was inventive and from going to animation from real life was a real cool treat! It seemed like it was going back and forth into two different movies theatres but seeing the same conecpt in animated form, which was a really cool effect!

Luc Besson make a pretty good movie that combines the real world and the animation world... The animation itself was pretty good, yet the story was easy to understand and enjoyable to be watched... Freddie Highmore shows his quality as the most shining young star right now I think... Not just he was pretty good in acting, but he was great in lending his voice to an animation movie... It's been a pretty nice movie to be watch by the family...