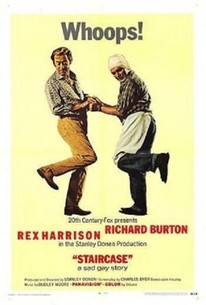 Two aging homosexual hair stylists deal with their invalid mother's and their own mortality in Staircase. Harry (Richard Burton) is the younger, more troubled man who shares an upstairs apartment with Charlie (Rex Harrison). Harry deals with Charlie's constant insults as Charlie waits for a summons to appear in court for dressing like a woman. Harry's mother (Catherine Nesbitt) stays with the couple as he helps her with her debilitating arthritis. Charlie visits his mother in the hospital, but the woman suffers from dementia and can no longer recognize her own son. Harry, self conscious over his balding hair, wears either a turban or a very bad toupee in the film. Harry agrees to stand by Charlie as he nervously waits for his court date, taking Charlie's insults in stride. After 30 years, the two argumentative lovers agree to continue their relationship in this depressing drama with tinges of homosexual humor. Music provided by Dudley Moore.

Rogers and Starr
as Drag Singers
View All

Stanley Donen's Staircase is an unpleasant exercise in bad taste -- in taste so bad, in fact, you wonder how Donen, who directed Singin' in the Rain and Bedazzled could have directed it.

Harrison and Burton give the central relationship a lived-in quality and a gentleness that can be devastating in the film's rare but welcome quiet moments.

There are no featured audience reviews yet. Click the link below to see what others say about Staircase!