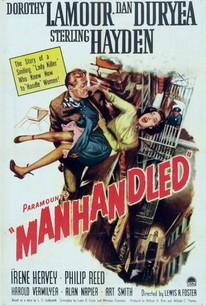 Produced by Paramount's Pine-Thomas unit, Manhandled is a no-nonsense film noir with a well-chosen cast. Small-time hoodlum Karl Benson (Dan Duryea) uses and abuses several innocent people in his efforts to get ahead. Among Benson's victims is Merl Kramer (Dorothy Lamour), who doesn't find out about her boyfriend's perfidy until it's almost too late. Sterling Hayden co-stars as insurance investigator Joe Cooper, who likewise exploits poor Merl, albeit for a good cause: Cooper is on the trail of some missing jewels. A subplot involves a married couple (Irene Hervey and Alan Napier) and the wife's would-be lover (Phillip Reed). Manhandled's level of tension never lets up, not even in its final scenes.

There are no featured reviews for Manhandled at this time.