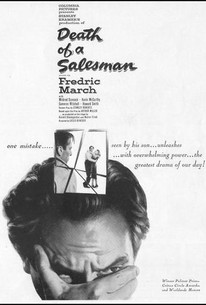 Arthur Miller's Pulitzer Prize-winning play +Death of a Salesman is brought to the screen by producer Stanley Kramer. The salesman of the title is Willy Loman (Fredric March), who has spent his entire life pursuing success, only to find himself a middle-aged failure. The shock of this realization causes Willy's mind to wander between the past and the present, as he muses on lost opportunities, shattered dreams, and his turbulent relationship with his oldest son, Biff (Kevin McCarthy). Willy ultimately loses all contact with reality, which results in fate's final blow. Lee J. Cobb, who'd played Willy on Broadway, had been blacklisted by Hollywood because of his alleged "leftie" politics, thus was denied the opportunity to star in the film version, but Mildred Dunnock was permitted to brilliantly recreate her stage role as Willy's long-suffering wife, Linda ("Attention! Attention must be paid to this man"). A second filmization of +Death of a Salesman was produced for television in 1985, with Dustin Hoffman as Willy Loman.

Howard I. Smith
as Charley

Jeanne Bates
as Mother
View All

Critic Reviews for Death of a Salesman

Excellent drama for those who can take it.

An excellent but depressing picture.

Despite five Oscar nominations, this film version of Miller's best-known play is too static and stagy, and Fredric March is miscast as Willy Loman

Audience Reviews for Death of a Salesman

A disappointing interpretation of a fabulous play. The film makers never successfully translate this into a different medium and it takes away from the gravity. March, the star of every single 30s film (or so it seems) is poor in his depiction of Loman.

Death of a Salesman Quotes