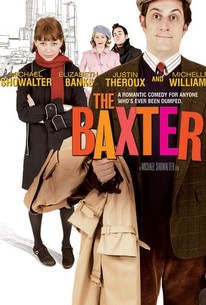 Critics Consensus: The Baxter is good-natured, but there are simply not enough laughs to fuel this comedy.

Critics Consensus: The Baxter is good-natured, but there are simply not enough laughs to fuel this comedy.

Critic Consensus: The Baxter is good-natured, but there are simply not enough laughs to fuel this comedy.

A man with a "doormat" personality tries standing up for himself for a change in this comedy. Mild mannered tax accountant Elliot Sherman (Michael Showalter) is what he calls a "Baxter": the kind of calm, unexciting fellow who "wears sock garters" and "enjoys raking leaves." Loved by bosses and parents, Elliot is a perfectly nice guy. And that's his problem -- he's safe and pleasant, but not very interesting, so as a consequence he hasn't had much luck with long-term relationships, and more than one woman has abandoned him for someone more exciting. Elliot believes his luck has finally changed for the better when he becomes engaged to Caroline Swann (Elizabeth Banks), a smart and attractive editor at a successful magazine. However, a few weeks before the wedding, who should come back into Caroline's life but Bradley Lake (Justin Theroux), her high school sweetheart and, according to many, the great love of her life. Bradley quickly makes it clear that he wants to win Caroline back, and generally in such circumstances Elliot would politely step aside, but just this once Elliot decides to fight for the woman he loves. Elliot gains an unexpected champion in Cecil Mills (Michelle Williams), a frumpy but adorable temp employee at his office who encourages Elliot to develop a take-charge attitude, though the results aren't quite what he expects. The Baxter was written and directed by Michael Showalter, who also plays Elliot; Showalter was a member of the sketch comedy troupe the State, and also works with the comedy performance trio Stella, whose other members, Michael Ian Black and David Wain, also appear in the movie.

Seth Herzog
as Bar Baxter No. 3

Andrea Rosen
as Bridesmaid
View All

Critic Reviews for The Baxter

The performers are fresh and offbeat, with the diminutive Peter Dinklage (Elf, The Station Agent) especially funny as a gay wedding planner named Benson Hedges.

Showalter tackles his mission with energy and an upbeat attitude that makes him a winner as a lovable loser.

Only when Williams is around does the movie seem human, true, and funny: Even in her slapstick there's pain. She's almost too good: It's not until she's left a scene that you realize the movie isn't working.

There are enough laughs that those who enjoyed The 40-Year-Old Virgin might want to take The Baxter for a whirl.

Showalter's Elliot, self-described as the kind of guy who gets hay fever just raking the leaves, never breaks out of the Baxter cliché. Frankly, he makes a pretty good case for why the sad sack never gets the girl.

His hipster doofus is a complete character he's created to win over girls, and there's not really anything sincere or real about it. His sad sack loser in The Baxter is so annoyingly emasculated that it didn't feel honest, ever

A droll romantic comedy that relies on a self-deprecating brand of humor which must be a bit of an acquired taste. The film's utter predictably sinks this exercise in obviousms, making its few funny moments not worth waiting for.

What comes to mind are TV sitcom pilots full of strain, and the forlornly perky mechanisms of old Day & Hudson comedies.

Clearly the filmmakers are trying to make The Baxter look old-fashioned. But there's a modern smugness and superiority that undermines that attempt.

It doesn't take much imagination to guess who will end up with whom, but The Baxter is agreeably silly and has lots of simple charm.

Audience Reviews for The Baxter

CUTE! Peter Dinklage completely stole the movie, as he always does. Michelle Williams is adorable, as she always is. Very cute and offbeat.

this low-key comedy invents a culture of upscale WASP nerddom that Showalter gets to act out with the maximum mannerisms; Rudd and Banks are unfortunately diminished, mostly by mediocre dialogue; a major step forward in portraying the ultra-cool romantic rival as shallow and tiresome, showing how a person can still look pretty lame even after they fulfill a hip-suave-sensitive checklist--more realistic than Bradley Cooper in Wedding Crashers, the long-delayed post-PC-evolution of the Omega Theta Pi psychopaths in Animal House

A really great and innovative way of doing a romantic comedy.

One of the most underrated movies ever. If you liked The State you'll definitely like this.