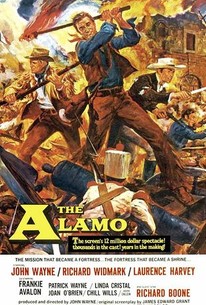 Critics Consensus: John Wayne proves to be less compelling behind the camera than he is before it in The Alamo, a blustery dramatization of the fort's last stand that feels more like a first draft.

Critic Consensus: John Wayne proves to be less compelling behind the camera than he is before it in The Alamo, a blustery dramatization of the fort's last stand that feels more like a first draft.

John Wayne's directorial debut The Alamo is set in 1836: Wayne plays Col. Davy Crockett, who, together with Colonels Jim Bowie (Richard Widmark) and William Travis (Laurence Harvey) and 184 hardy Americans and Texicans, defends the Alamo mission against the troops of Mexican general Santa Ana. There's a lot of macho byplay before the actual attack, including the famous "letter" scene in which Wayne craftily rouses the patriotic ire of his subordinates. Also appearing are Richard Boone as Sam Houston, and Chill Wills (whose somewhat tasteless Oscar campaign has since become legendary in the annals of shameless self-promotion) as Beekeeper. Wayne's production crew was compelled to reconstruct the Alamo in Bracketville, Texas, about a hundred miles from the actual site. Dimitri Tiomkin's score, including The Green Leaves of Summer, received generous airplay on the Top-40 radio outlets of America. Rumors persist that Wayne's old pal John Ford directed most of The Alamo; cut to 161 minutes for its general release, the film was restored to its original, 192-minute length in 1992.

Chuck Roberson
as a Tennessean

Critic Reviews for The Alamo

In spite of the painstaking attempts to explore the characters of the picture's three principal heroes (Bowie, Crockett, Travis), there is an absence of emotional feeling, of a sense of participation.

An elephantine, historically inaccurate, stridently patriotic tribute to the handful of Texans who faced assault by 7,000 Mexican baddies.

As his own producer and director, Mr. Wayne has unfortunately let his desire to make a "big" picture burden him with dialogue. His action scenes are usually vivid, his talk scenes are long and usually dull.

The film is sometimes too gabby and too sentimental but is magnificent to look at, and the inexorable climax is awesome in its scope and fury.

All the pontificating about the joys of freedom becomes irritating, but James Edward Grant's dialogue occasionally crackles with enough humorous wit to hold an audience untill the gripping finale.

Despite a banal and preachy script, full of speeches about religion and patriotism,the film has some good action sequences; overall, it's not worse than the 2004 remake starring Billy Bob Thornton.

John Wayne doesn't appear for the first twenty minutes of The Alamo, his 1960 directorial debut, and that's a bad sign.

Could Wayne have crafted a better film if he only tried his hand at directing, instead of putting on the hero's mantle as well? Doubtful.

Audience Reviews for The Alamo

A good rendering of the story that is hampered by overlength. Richard Widmark gives the film's best performance.

A greatly historically flawed and slightly too long and tad bit boring depiction of one of the most well known events in Mexican and Texas history that, despite all it's problems, is still passable Hollywood entertainment. The acting is not bad, and the battle scenes are well done, but for me, where the movie shines is in the music and cinematography departments.

Viewed as history, John Wayne's epic production of 'The Alamo' is as full of holes as Swiss Cheese (the final battle actually lasted less than an hour, in the pre-dawn darkness of March 6, 1836; current scholarly consensus is that the historical Crockett attempted to surrender, at the end of the furious onslaught, but was executed), but just as Wayne mentor John Ford never let 'the facts' interfere with a good story, first-time director Wayne wanted to tell a tale of larger-than-life heroes, taking a stand for what was right, and being willing to die for that cause. It was a firm belief in these truths that pushed Wayne into investing over ten years of his life, and much of his personal fortune, in telling this story, and 'The Alamo' was, and is, a triumph. The film can really be broken into two distinct parts; the first part introduces the characters, providing insights into their personalities, and tells a melodramatic tale of a beautiful woman (the radiant Linda Cristal), being forced into an unwilling relationship with an evil, profiteering Texan, who is rescued by the plain-spoken and heroic Davy Crockett, as portrayed by Wayne. The story bears similarities to 'The Fighting Kentuckian', a Wayne vehicle of twelve years earlier. In this version, however, Wayne doesn't 'win' the girl, but gives her a rather preachy speech about patriotism, and doing what's right, and sends her on her way. Despite a terrific fight scene between a bunch of the Texan's henchmen, and Crockett and Jim Bowie (portrayed with easy charm by Richard Widmark), this first part drags, a bit, and seems contrived to allow Wayne to air his political beliefs. Bear with it, though, because when the action moves to the mission/fortress of the Alamo, for the second half of the film, Wayne's talents as a director truly shine. The story of the 13-day siege between the Alamo's 187 defenders, and General Santa Anna's 6,000-man army, has NEVER been told on a grander scale than in the John Wayne version, and the uncut edition of the film is presented in a wide-screen format, which allows the viewer to really share Wayne's vision. With a nod to the fact that the Mexico of today is a staunch ally (several characters make a point of saying how 'proud' they are of the Mexicans, even as the two forces are killing each other!), the story flows between exciting 'victories' (stealing the cattle, spiking the Mexican cannons), and an understanding of the inevitable conclusion (defined by Lawrence Harvey, as Travis, in the memorable 'sword in the sand' scene). Harvey's Travis is the best-realized of the film's many characters; he brings a humanity to the complex, driven commander, growing from someone insensitive to others, into a leader who earns everyone's respect. Wayne used thousands of Mexicans as extras in the film, which gives the viewer a far greater sense of the magnitude of the siege than Republic's 'The Last Command' or Disney's 'Davy Crockett' ever could. The battles, particularly the final one, as row after row of Mexican foot-soldiers overrun the pockets of defenders, are unforgettable! Each character is allowed to die heroically, and is given a lingering moment to make a final gesture (Travis breaks his sword over his knee as Mexicans surge past, Bowie fires his unique gun, a brace of pistols, and swings his famous knife, Crockett, bayoneted to a door, still manages to pull free, and torch the magazine). The film's climax, alone, would make the film a 'must' for any action fan. The cast includes many well-known character actors and long-time Wayne friends, including Ken Curtis as Lt. Dickinson, Travis's adjutant; Chill Wills as the most outspoken of Crockett's men; Guinn 'Big Boy' Williams, Denver Pyle, Chuck Roberson, and many others, as defenders. Wayne's son, Patrick, has a small but visible role as James Butler Bonham, the famous Alamo dispatch rider, and his daughter Aissa plays the Dickinson's child, Angelina. 'The Alamo', for all it's faults, is a magnificent spectacle, monumental in scope. It is a fitting tribute to it's star/director, and an ESSENTIAL part of any John Wayne collection!

Interest American history in battle and I like John Wayne's movies.