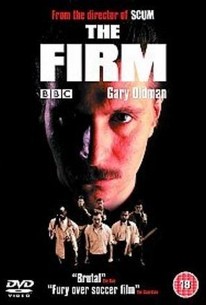 The Firm, acclaimed British television director Alan Clarke's last feature film, deals with the football hooliganism that was such a serious problem in England during the 1980s. Gary Oldman stars as Bex, a real estate agent whose true passion is being the "top boy" of the Inter-City Crew, or ICC, from West Ham (based on the real-life Inter-City Firm). As the film opens, Bex is engaged in a football match while his car is being vandalized by rivals from Birmingham, led by Yeti (Mike Leigh regular Philip Davis, who also co-starred in Clarke's Scum). His mates urge Bex to seek violent revenge immediately, but he has other plans. Bex calls a meeting with the two other major "firms" in England and proposes that they band together for a trip to Germany to face off against Dutch hooligans at the European Cup. But his rivals balk because Bex insists on leading the new national firm. It's decided that whichever firm comes out on top in a round robin series of battles will lead them all to Germany. But Yeti continues to target Bex and his crew, and as the violence escalates, there's growing dissension in the ranks. Further complicating matters, Bex's wife, Sue (Lesley Manville, Oldman's one-time wife and another Leigh regular), takes a dim view of his violent "hobby," and their relationship takes another hit when their toddler son gets hold of Bex's beloved Stanley knife. The Firm's airing on the BBC created some controversy. Clarke went on to direct the influential experimental film Elephant before he died of cancer in 1990. ~ Josh Ralske, Rovi

Critic Reviews for The Firm

The Firm remains the finest exploration and examination of football hooliganism, yet still manages to be far more than simply the sum of its parts.

Gary Oldman's give one of his finest performances as Bex, who projects outward respectability under which lurks a creature of fragile masculinity and senseless rage.

A jarring exploration of the male psyche and the devastating consequences of pride and uncontained machismo in a society where men's lives have lost meaning.

Clarke's specialties are anger and violence, and he captures them with a brutal precision that belies the inherent messiness of the action.

Audience Reviews for The Firm

I'm rating "The Firm" as high as three stars mostly because of Gary Oldman's fiery performance, but the sports-goon mentality depicted in this film is so alien and repulsive to me that I really had a hard time keeping a scowl off my face while watching. I also must plead guilty to having difficulty understanding some of the dialogue, between the heavy accents and the regional slang. The directing of the final scene puzzled me -- it almost played like a segment from the evening news, where the characters were swaggering in front of some unseen interview correspondent. A strange shift in tone. Almost like breaking the fourth wall.

There are a lot of football-violence films, but they're all Spurs, Villa, et al. This film is the Manchester United treble-winning team of '99 - unstoppable. This is mainly all thanks to Oldman going bugnuts and off the wall in one of his best performances as a man who leads two lives, which can only end in tears and bloodshed. It shows both sides of their actions and nicely distances itself from the actual game, proving that these 'firms' are actually nothing to do with football. This film is the King, the Top Dog and the Guv'nor.