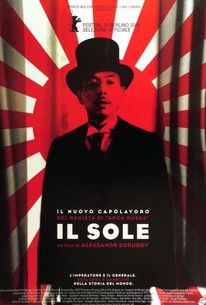 Critics Consensus: Certainly not for the impatient, Aleksandr Sokurov's deliberately paced look at Hirohito in the waning days of World War II is both enlightening and admirable in its restraint.

Critics Consensus: Certainly not for the impatient, Aleksandr Sokurov's deliberately paced look at Hirohito in the waning days of World War II is both enlightening and admirable in its restraint.

Critic Consensus: Certainly not for the impatient, Aleksandr Sokurov's deliberately paced look at Hirohito in the waning days of World War II is both enlightening and admirable in its restraint.

The events surrounding Japanese emperor Hirohito's August 1945 call for a complete cease fire among his troops serves as the subject of Alexander Sokurov's thought-provoking historical drama. In the aftermath of Hiroshima and Nagasaki, Emperor Hirohito (Issey Ogata) announces to the world that Japan will surrender unconditionally. His declaration was broadcast over the radio on August 15, 1945, and stunned the Japanese people. In this film, Sokurov details not only the events surrounding the emperor's declaration of surrender, but his renunciation of divine status as well.

Shiro Sano
as The Chamberlain

Toshiaki Nishizawa
as Yonai, Minister of the Navy

Naomasa Musaka
as Anami, Minister of the War
View All

Critic Reviews for Solntse (The Sun)

Sokurov, who also acted as director of photography, films the character and his surroundings with the eye of a newly arrived visitor to another world.

Working from Yuri Arabov and Jeremy Noble's script, Sokurov has a wonderful time not simply with Hirohito and history, but with his filmmaking, which can be oblique to the point of being stultifying. Here he plays with scale.

Finds beauty, madness and outright bizarreness in the sight of a lost, slightly freakish man attempting to understand his altering reality.

The Sun took four years to reach American theaters, but the long delay hasn't diminished the force of Sokurov's experimentation.

First shown at the Berlin Film Festival four years ago, The Sun is finally receiving its welcome American theatrical release, which means that one of the best movies of 2005 is now also one of the best of 2009.

An astounding work of intimate detail that should not be missed.

With its slow pace, weird stabs at slapstick, and odd stilted performances, The Sun may not be for everyone -- but in its very perverseness, it has to to be noted that this is a unique, mesmerizing, mad and brilliantly intuitive study.

Lauding the work of Russia's finest living director is getting repetitive, but Sokurov goes from strength to strength.

Hirohito's interest in marine biology provides Sokurov with a fruitful thematic and visual leitmotif: images of fish glide through the film, marking its most emotionally and politically significant moments.

... not a conventional biographical portrait by any definition, but rather a reflection in the inner life of the Emperor, a man who was considered a god by his people and treated as such.

Audience Reviews for Solntse (The Sun)

"The Sun" is a surprisingly lightweight movie, considering its setting at the end of World War II. The tone is deeply ironic, wondering how Emperor Hirohito(Issei Ogata) could allow the atrocities of an inhuman war to be fought in his name if he was so cultured, educated and interested in the sciences which clashes with the divinity forced upon him.(Correct me if I am wrong, but wasn't Hirohito just a figurehead?) In fact, his palace design owes more to Western than Japanese ideas. Upon his desk are the busts of Abraham Lincoln, Charles Darwin and Napoleon.(Well, the last one did not turn out so well.) In fact, Hirohito seems positively hurt at American anti-immigration legislation, partially blaming that for the war. And as General Douglas MacArthur(Robert Dawson) meets with Hirohito and does not find the devil he was expecting, the emperor discovers a world devastated just outside of his door that he was hardly aware of since most of his learning comes from books and tutors.