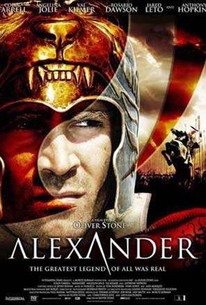 The short life and quick death of Alexander the Great is recounted in this literate historical epic. Decked out in a blonde wig, Richard Burton stars as the Grecian warrior who conquered the known world while only in his twenties, then wept because there were no more worlds left to conquer. While the film's 141 minutes are occasionally bogged down by near-existential dialogue sequences (What doth it profit a man etc. etc.), the battle sequences are among the best and most accurate ever filmed. Fredric March and Danielle Darieux costar as Alexander's parents Philip of Macedonia and Olympius, Claire Bloom does what she can with the nothing role of Alexander's wife Barsine, and Michael Hordern and Harry Andrews are cast as Demosthenes and Darrius, respectively. Lensed in Spain and Italy, Alexander the Great conquered no new worlds at the box-office, perhaps because Richard Burton, brilliant though he was, hadn't yet attained "saleability".

Fredric March
as Philip of Macedonia

Riccardo Valle
as Hephaestion
View All

Critic Reviews for Alexander the Great

Robert Rossen has aimed for greatness in Alexander the Great and has missed honorably.

The most notable battle on view in this picture isn't any of the skirmishes between Alexander's army and the opposing forces but the effort between Burton's blonde wig and March's shaggy beard to upstage each other in grievous grooming.

It might be a literate epic, but it's a long and heavy slog.

...even more ineffectual and dull than Oliver Stone's recent attempt.

Audience Reviews for Alexander the Great

Colorful pageant of a film would have benefited from some judicious trimming, by about 1/2 an hour.

Huge overblown epic about the ancient world has Burton as Alexander the Great who fails to really bring the history to life or draw you in so you care about the well known character one way or the other. March was unrecognizable as Alexander's father Philip but stood out in the role. It plays like a soap opera with the disputes between ancient nations, between son and parents, and between leader and subjects. I kept expecting the story to go further. I had recently read a biography of Alexander the Great by Agnes Savill that seemed fairly balanced. There is hardly anything about the military strategy used, the few battle scenes lack action or energy, and the influence of Aristotle and the way that Alexander's culture spread is scarcely mentioned.

Another boring epic I saw on TV. I didn't see the whole thing, but some scenes were okay. Overall an okay movie.