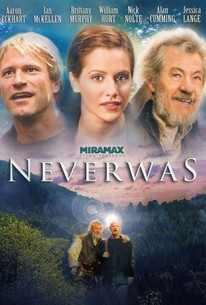 A man seeks to unlock the mysteries of his family's tragic past in this drama. Zach Riley (Aaron Eckhart) is a psychiatrist who has resigned a prestigious position at a major university to take a job at the Millwood Clinic, a private residential facility run by one Dr. Reed (William Hurt). Riley tells Reed he was inspired to come to Millwood by the case of a family friend who was a patient there years before, but what Riley doesn't mention is the person in question was his father, T.L. Pierson (Nick Nolte), a successful but reclusive children's author whose book "Neverwas" became a remarkable critical and popular success. For all his talent and success, Pierson was haunted by mental illness and drug addiction, and after leaving Millwood he committed suicide, with young Zach finding the body. Ever since, his mother (Jessica Lange) has been bitter and blamed Zach for Pierson's death, and he's come to Millbrook looking for answers and closure regarding his dad. While working with the patients at Millwood, Riley strikes up a friendship with Gabriel (Ian McKellen), a charming older man with a poor connection to reality who was friendly with Pierson when they were both in treatment there; Riley also renews his childhood friendship with Maggie Blake (Brittany Murphy), a Millwood intern who was powerfully affected by "Neverwas" when she was young. Neverwas is the first feature film from writer and director Joshua Michael Stern.

Mark Tisdale
as Giant
View All

This is the kind of movie where a madwoman's outburst leads her to throw a mug that just happens to be filled with gold sparkles -- which can then be photographed cascading down on all the adorable loonies, in slow-motion.

At a time when most films lack subtlety, it is rare to find one as delicate, wistful and tender as 'Neverwas.'

Writer/ director Joshua Michael Stern has crafted something more than a mess and something less than a film that hits home. Neverwas never does quite win us over.

Never has so much talent come to so little because of a screenplay that's so adrift and aimless. Eckhart plays a psychologist with enough personal psychoses to keep himself preoccupied for a lifetime.

Seems rather a waste to use name actors and then not have them actually do anything.

Good actors are wasted, sets dominate storytelling, and it's all based on the most banal and artificial of children's tales. Avoid.

...unlikely to find much of an audience outside of the film festival circuit.

Cast: Aaron Eckhart, Ian McKellen, William Hurt, Ken Roberts, Bill Bellamy, Michael Moriarty, Brittany Murphy, Jessica Lange, Alan Cumming, Nick Nolte Director: Joshua Michael Stern Summary: After taking a job at the mental institution that once housed his father (Nick Nolte) -- a famous children's author -- erudite psychiatrist Zach Riley (Aaron Eckhart) befriends a schizophrenic (Ian McKellen) who unlocks a string of family secrets. My Thoughts: "The film is a struggle of insanity and what is real. Ian McKellen is brilliant in his role. You get so caught up in his character that you start to question if his insanity is truly a reality. There are a lot of great supporting actors in this film as well. I was pleasantly surprised at how well Brittany Murphy was in this. All the roles I see her in lately are so dark and lacking good acting from her part. But she was full of life in this film, and I liked seeing her that way. Aaron Eckhart is a character that maybe some can relate to in the sense of him still missing and mourning his father after so many years. I thought he was great. The story may be predictable for some, but just try not to analyze it so much. Just let yourself get swept up in the story. It's a heart warming tale that is also sad and dark at times. It's a great story that should be seen."

I really enjoyed this movie. I got a little confused about what was happening from time to time, but I think in the end it all kind of came together for me. I really think that Ian McKellan and Aaron Eckhart are very fine actors, and definitely made this movie worth watching.

A whole lot of talented people in a film that really never goes anywhere.

I don't know where eabrownfield (reviewer) gets off telling people to "stay away" from Neverwas. This is a magical, and very touching story. An excellent premise with a superb cast and stellar performances from all involved. The scenic settings were well shot and lit, often showing the differences between the dark and lighter sides of life. I say dark, yes there are parts in this film that are hard hitting, poinient moments that really make you think and get you inside the characters being played, again i think this is down to the great acting. The flip side is the fairy tale narrative that runs through the whole film, not that it turns in to a children's film at all, as its a story I'm sure many can relate to and will enjoy being told in this fashion. I will say it probably deserves its pg13 rating, its perhaps not for the very young, despite its fairy tale like appearance. Overall go and see this film, you wont be disappointed, i had a great time.