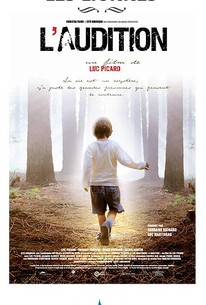 Quebecois actor and filmmaker Luc Picard takes the helm for this Genie Award-winning drama about an actor in search of the perfect role, and the pregnant girlfriend forced to make a life-changing decision. Forty-year old Louis (Picard) is a loud-mouthed repo-man who has nurtured a lifelong dream of becoming a successful actor. Fortunately for Louis his cousin is a casting agent, and he soon learns that local producers are seeking to fell the role of a father videotaping a final message for his two year-old son. Lately the strain of his job has been wearing not only on Louis, but his frustrated girlfriend Suzie (Suzanne Clement) as well. When Suzie discovers that she is pregnant, she immediately begins pondering the prospect of leaving Louis to raise the pair's child in a more stable environment. Though she hesitates to break the news to Louis for fear of how he will react, the news soon gets out when Louis spots Suzie showing off baby clothes to her circle of friends. When Suzie discovers that Louis has been practicing for the audition in secret and has since won the role, she determines to stick out the relationship just the low-level criminal's sordid past threatens to catch up with him in the most devastating manner imaginable. ~ Jason Buchanan, Rovi

There are no critic reviews yet for L'Audition. Keep checking Rotten Tomatoes for updates!

There are no featured reviews for L'Audition at this time.