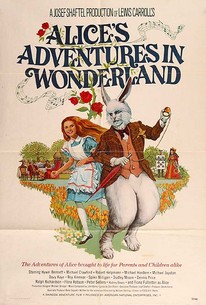 Ralph Richardson
as The Catepillar

Flora Robson
as Queen of Hearts

Rodney Bewes
as Knave of Hearts

Ray Brooks
as 5 of Spades

Julian Chagrin
as Bill the Lizard

Dennis Price
as King of Hearts

Richard Warwick
as 7 of Spades

Dennis Waterman
as 2 of Spades
View All

There are no critic reviews yet for Alice's Adventures in Wonderland. Keep checking Rotten Tomatoes for updates!

One of the most faithful adaptations but the magic is missing from this British production - after watching several of these cinematic journeys to Wonderland, I now wonder if it is even possible to do justice to this classic. Interesting sets and plenty of people in animal costumes, but the staging is sterile and Fiona Fullerton doesn't seem quite right as Alice.

Another all star flop production of Alice in Wonderland. I don't know why filmmakers continue to make live action movies of the story.

They got the look and dreamy feel right. It moves pretty slowly. I like the songs.