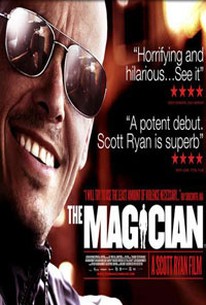 'When Melbourne hit-man Ray Shoesmith discovers that his next-door neighbor is a film student, he commissions him to document his life. The footage is to be released in the event of his early death. The focus is not on the violence, but on the conversation, the banalities and intensities of human interaction and obsessive interest in detail. We see what makes Ray tick, even as we witness his brutal efficiency. This darkly comic tale is fictional narrative, shot like a documentary. Its main character is a likeable killer, whose strangely moral illustrations take a jab at everything from the legalization of drugs to the prevalence of gays in Hollywood. --© Regent

Critic Reviews for The Magician

Mostly, however, this dreary Antipodean curiosity is a yob-filled slog of hard-man posturing, all of it bathed in an oppressive testosterone funk. And I haven't even mentioned the hairy buttocks.

The camera has penetrated the fabric of everyday life in unsettling and insidious ways, but not quite enough to mistake the pseudo-documentary-ness of The Magician for recorded reality.

A gritty, shot-off-the cuff gem and a top prize winner in its native Australia.

The Magician, while predominantly a character study, does highlight how comfortable Australia is with criminality.

A fairly pointless and not particularly well-accomplished exercise, although Scott Ryan gives an impressive, charismatic performance.

Ray is a ratty little bugger with a corner pub smile that hides secrets you're safer not knowing but can't wait to discover.

The Magician is a colourful success: protagonist Ray Shoesmith (Ryan) is a fair-dinkum Aussie hit man, who radiates a raw and magnetic screen that feels enticingly un-cinematic

might almost be described as Tarantino-esque, were it not for the absence of tight plotting.

Totti is either genuinely foreign and amusing or is an incredibly gifted comic actor - his innocent, matter-of-fact delivery of [some of his lines] will have you laughing for days afterwards.

After pulling this rabbit out of the hat, it'll be interesting to see what Ryan's next trick will be.

There's nothing particularly new here, but the storytelling style makes it worth a look.

Rich Cline
Shadows on the Wall
View All Critic Reviews (16)

Audience Reviews for The Magician

Genuinly funny film with some really sharp moments. Brilliant view into the mind of a 'hitman'. Well worth a watch.