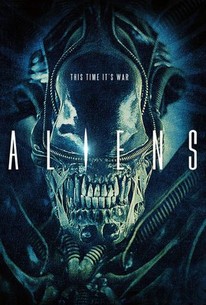 Critics Consensus: While Alien was a marvel of slow-building, atmospheric tension, Aliens packs a much more visceral punch, and features a typically strong performance from Sigourney Weaver.

Critics Consensus: While Alien was a marvel of slow-building, atmospheric tension, Aliens packs a much more visceral punch, and features a typically strong performance from Sigourney Weaver.

Critic Consensus: While Alien was a marvel of slow-building, atmospheric tension, Aliens packs a much more visceral punch, and features a typically strong performance from Sigourney Weaver.

Big-budget special effects, swiftly paced action, and a distinct feminist subtext from writer/director James Cameron turned what should have been a by-the-numbers sci-fi sequel into both a blockbuster and a seven-time Oscar nominee. Sigourney Weaver returns as Ellen Ripley, the last surviving crew member of a corporate spaceship destroyed after an attack by a vicious, virtually unbeatable alien life form. Adrift in space for half a century, Ripley grapples with depression until she's informed by her company's representative, Carter Burke (Paul Reiser) that the planet where her crew discovered the alien has since been settled by colonists. Contact with the colony has suddenly been lost, and a detachment of colonial marines is being sent to investigate. Invited along as an advisor, Ripley predicts disaster, and sure enough, the aliens have infested the colony, leaving a sole survivor, the young girl Newt (Carrie Henn). With the soldiers picked off one by one, a final all-female showdown brews between the alien queen and Ripley, who's become a surrogate mother to Newt. Several future stars made early career appearances in Aliens (1986), including Lance Henriksen, Bill Paxton, and Reiser. ~ Karl Williams, Rovi

Louise Head
as Double for Newt

Kiran Shah
as Double for Newt
View All

Sigourney Weaver is merely terrific... When she straps on her armament to do battle with the aliens, she makes Sylvester Stallone look like a pipsqueak.

Beyond dispute, however, is the film's timeless worth as a cathartic work, especially in terms of its accidentally commentary on the sexism of the corporate structure.

The whole finale is white-knuckled, some of the best aciton and suspense film-making I've ever seen.

Scene to scene, encounter to encounter, its tension builds unrelentingly. So, fasten your seat belts. It`s a blast.

[Aliens] is a spectacular example of state-of-the-art science fiction simply because it never tries to be overtly spectacular.

It's blaster action, not Gothic future-horror. Fortunately, director-screenwriter James Cameron has shaped his film around the defiant intelligence and sensual athleticism of Weaver, and that's where Aliens works best.

Around 100 minutes of some of the finest tension building and breathless action ever committed to celluloid.

Just when you think the movie is over, Cameron comes back with another piece of action more daring than the last. While Aliens has more than its share of special effects, the heart of the film's success is its intense, unrelenting and spectacular action.

Perhaps the greatest exemplar of science-fiction, action, and horror faultlessly blended together into one film.

The moment the action is situated in Acheron everything is simplified and loses its mystery. [Full Review in Spanish]

Eschewing the claustrophobic foreboding of Alien, Cameron takes all the anxieties and fears that had been built in the original and refracts it through his action movie sensibilities to create a smart action thriller.

While the first film focused on creating an atmosphere of pure tension, this sequel is much more action-oriented, even if its first hour is actually very slow - and instead of one alien, Cameron has now a horde of goo-spewing, acid-blood creatures to scare the audience to death.

Director James Cameron's 1986 blockbuster follow-up to Ridley Scott's Oscar winning science-fiction/horror flick that became one of the biggest grossing films of 1979 asks a good question to a successful hit.....How do you make a successful sequel to a film in which much of the suspense comes from learning about the mysterious monster? The Answer? Make a lot of scary monsters,and this time around have our heroine armed to the teeth with an array of weapons ready to take them on and face an all out war against them including the "Mother" of all aliens! "This time,its war,"was the tagline and Aliens went on to become one of the biggest blockbuster films of 1986 and not to mention ending up being nominated for Seven Oscars including a Best Actress nomination for Sigourney Weaver and winning two Oscars for Sound Effects Editing and Special Visual Effects. Filled with quotable lines("They mostly come at night.....mostly),and great character performances including scenes of wall to wall action galore and the ultimate showdown with the heroine and the Mother that brought audiences to there feet when "Aliens" became the runaway hit of 1986. "Aliens" cemented Sigourney Weaver's place as an female action star as well as a boxoffice magnet-draw while it also gave James Cameron a stepping stone as one of the most innovative filmmakers of the 1980's,a position he's managed to hold well into the new millennium considering giving ALIENS not one of the best films of the 1980's,but opened up a new genre in the science fiction/action-adventure genre ...a title that holds up well 30 years later. ALIENS opened in 1,437 theaters nationwide on July 18,1986 and it went to an opening gross of $6.9 million and a opening weekend gross of $10 million. It was the Number One movie at the box-office for four consecutive weeks grossing more than $85.1 million becoming the seventh highest grossing film of 1986 taking in an astounding $180 million at the boxoffice to become the highest grossing "R" rated movie of all time. Even 30 years later it still packs a visceral punch.

I liked this more than the first one. Simply a rocking movie & I do recommend it to watch. But you need to watch the first one to get the general idea about the story line.

Just like the film that precedes it, Aliens is a cinematic masterpiece. Whereas Alien was a space horror type film that was all about mood, tone, and atmosphere, and using the claustrophobia of the ship to produce its scares, Aliens is a rip-roaring balls out action fest. The tension and claustrophobia of the setting is used to make things more intense and scary, but this is an action film through and through. Set 57 years after the events of Alien, Ellen Ripley, last surviving member of the Nostromo, is awoken from stasis, and given another mission. In her time away, LV-426, the planetoid where the Nostromo crew encountered the vicious alien in the original film, has been colonized by a group of terraformers. However, contact with them has been launched, so a group of marines are sent in to investigate, and Ripley is sent along as a consultant. Like the first film, they encounter alien trouble, but instead of a single, yet , deadly threat, there are many of them, and this time, it's war. Ellen Ripley is one of the greatest action movie characters of all time. She became a trend setter for future heroines to come, but she herself is inspired by the blaxploitation stars of the 70s such as Pam Grier and Tamara Dobson. They laid the ground work, she just built on top of it. She started out as a strong woman just doing what she had to in order to survive in Alien, now, she's a fully developed bad ass that you don't want to mess with. She's not static though- she also shows her tender side by playing mother to the child stranded on the planet. The marines that accompany her to LV-426 aren't as developed, but they aren't totally cookie-cutter caricatures, either. In fact, some of them are pretty funny and likeable, even memorable. None of them outshine Ripley, though. The real star here is the visual effects. They are outstanding. They still hold up even to this day, and I'm amazed at how they managed to bring all these frightful creatures to life without reliance on CGI. It makes me yearn for the old days when it took blood, sweat, tears, and creativity to get the job done. Even though the emphasis is primarily on action, there's still some pretty intense, spooky, and riveting moments, with does of that moody, unnerving atmosphere from the first. Bottom line: this is one of the most impressive and influential sci-fi action films out there, so it is basically required viewing for fans of the genre, and people interested in great cinema in general. Both this and Alien are masterpieces in their own ways, and it's hard for me to pick which one is better, or which one I like more. They are similar, but different enough to make it unfair to really pick a favorite. Anyhoo, just see this, already, or rewatch it, whatever applies.