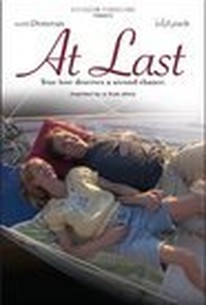 Thirty years after realizing that they had they had both found that rare once in a lifetime love, a man and a woman separated by fate decide to take a second shot at romance despite the fact that both had moved on with their lives a long time ago. As children growing up together in Grosse Pointe, Michigan, Mark and Sara were inseparable. As teens it just seemed that the two adolescents were just really close friends, but when Mark's family moves to New Orleans in the early 1970s the letters that he and Sarah exchange reveal that their true feelings for one another run far deeper. Though their love is vividly expressed in a pair of intensely heartfelt letters, any chance for romance is effectively destroyed when Mark's meddling mother Carole (Brooke Adams) intercepts the letters and hides them from her son. Mistakenly believing that each has rejected the other's love, Mark and Sara both manage to move on with their lives despite their initial devastation. Years later, Mark and Sara are both in their forties, living in different cities and locked in unhappy marriages - Mark to a career-driven psychiatrist named Laura (Jessica Hecht) and Sara to struggling alcoholic named Chris (Michael Arata). Mark feels like his life has become hollow, and spends the majority of his time confiding his true feelings in his older brother Earl (M.C. Gainey), an eccentric French Quarter artist. But one day, when Mark discovers the letters that had been hidden by his mother, he sees the opportunity for a new life of happiness and contacts Sara to tell her the truth. The moment the two make contact, it's as if they were both transported back to that special time when nothing else mattered aside from their growing feelings for one another. Neither Mark nor Sara are particularly happy with the way their lives have turned out, and excitedly make plans to rendezvous in New Orleans. Could it be that Mark and Sara were truly meant to be with one another, or did their one chance at a lifetime of happiness actually end with the hiding of those passionate correspondences so many moons ago?

Will Schierhorn
as Luke Singleton
View All

Critic Reviews for At Last

You might buy it if the film convinced you this was a love story for the ages, that Sara and Mark are so made for each other it would be a crime against heaven if they weren't together. But it doesn't.

The sheer convenience of the situations and characters involved ultimately undermines its impact.

At Last would work a lot better with genuine chemistry between the leads, and maybe a bit more humor.

...it's encouraging that a film of such competence and professional virtues could be realized outside the Hollywood industrial complex.

Audience Reviews for At Last

There are no featured audience reviews yet. Click the link below to see what others say about At Last!