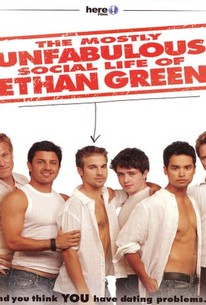 Critics Consensus: Ethan Green makes for an annoying protagonist, the jokes aren't funny, and everyone is as flat as the paper the comic is printed on.

Critics Consensus: Ethan Green makes for an annoying protagonist, the jokes aren't funny, and everyone is as flat as the paper the comic is printed on.

Critic Consensus: Ethan Green makes for an annoying protagonist, the jokes aren't funny, and everyone is as flat as the paper the comic is printed on.

After years of relying on the "it's not you, it's me" excuse, a gay man in his late twenties begins to realize that he might really be the one to blame for his failed relationships in this broad comedy. Based on a serialized comic strip of the same name, The Mostly Unfabulous Social Life of Ethan Green stars Daniel Letterle as the title character, a flighty serial monogamist for whom no boyfriend is quite "the one." When he dumps his current near-perfect squeeze, the recently out baseball player Kyle (Diego Serrano), his friends begin to worry -- even more so when he takes up with a rebound boyfriend, the moronic party boy Punch (Dean Shelton). But when one of Ethan's exes, Leo (David Monahan), announces his plans for a commitment ceremony, Ethan has to face his unrequited feelings and figure out what he really wants. Family Ties matriarch Meredith Baxter co-stars as Ethan's mince-no-words wedding-planner mom.

David Monahan
as Leo Worth

Gage Vernon
as Kid at Restaurant

Lenora May
as Ann Rosato

The Mostly Unfabulous Social Life of Ethan Green can't be accused of false advertising. This adaptation of the underground comic strip is mostly unfabulous.

There's just not enough real heart to go along with the cutesiness.

George Bamber's film is bouncy and agreeable but has a certain flatness to it; never making the case for its existence as a movie rather than a comic strip.

This feels like a school play that someone has dragged to film school and turned into a final project.

In his directing debut, David Vernon, formerly a first assistant and second assistant director, opts for the look of a cable TV pilot.

Writer David Vernon and director George Bamber have adroitly mined the best gags and one-liners from the strip, surrounded Ethan with a Dawson's Creek-quality supporting ensemble...

Lead characters who are completely unlikable fly right in the face of what most filmmakers think the audience wants. But I'll take that any day over a blandly nice character.

The drawings of Eric Orner's comic strip on which the movie is based are more animated than the actors who fail to give any dimension to their characters.

With its unpleasant characters, inconsistent script and awkward acting, what's not to hate?

The title does its own summing up: mostly, it's unfab.

No, he doesn't have anything terribly important, or even original to say, but he's funny, flighty and adorable, sort of like a gay Holly Golightly.

Started off great and than unfortunately drifted into slapstick comedy with few truly good moments. I was entertained throughout most of it, therefore I reluctantly give it 3 stars. BUT don't expect much: the plot is predictable, the acting mediocre at best, the comedy is mostly slapstick - entertainment, not great cinema.