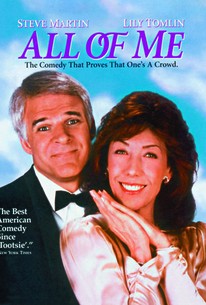 Critics Consensus: A high-concept farce carried by Carl Reiner's deft direction and the precise timing of its leads, All of Me is a body-swap comedy worth holding onto.

Critics Consensus: A high-concept farce carried by Carl Reiner's deft direction and the precise timing of its leads, All of Me is a body-swap comedy worth holding onto.

Critic Consensus: A high-concept farce carried by Carl Reiner's deft direction and the precise timing of its leads, All of Me is a body-swap comedy worth holding onto.

All of Me Photos

On her deathbed, mean-spirited millionairess Lily Tomlin has her will amended so that her soul will pass into the body of young, healthy Victoria Tennant. Thanks to a mix-up in transmutation, Tomlin winds up instead trapped in the body of upright (and uptight) attorney Steve Martin. The plot involves the fragility of male-female relationships, the importance of making commitments, and the antics of goofy guru Richard Libertini. As ridiculous as it sounds, All of Me is completely credible, thanks to Steve Martin's remarkable "body language" when conveying the notion that he's two different people with two different sets of emotions and gestures. Though the circumstances of the plot won't allow Martin to connect with the lovely Tennant, in real life things were different: the two costars were married shortly after filming wrapped. Phil Alden Robinson and Henry Olek adapted the script from Ed Davis' novel Me Too.

News & Interviews for All of Me

Get Ready for Step Up 3-D
Queen Latifah to Star in "All of Me" Remake
Superman to Make His "Return" via 3-D IMAX!

View All All of Me News

Critic Reviews for All of Me

Once the body-snare joke is under way, however, invention tends to flag and much of the ensuing humour explores the realms of fairly obvious smut -- brightly enough managed, though, if yon have a weakness for that.

At first the film is content to play the situation for raucous laughs, trading on the embarrassment of two sexes sharing the same body. But, once the parties start experiencing finer feelings, the film finally becomes too awkward for comfort.

Most of the film is about as funny as falling off a cliff while trying to solve a crossword puzzle.

Martin vaults to the top of the class with his brazen, precise performance. This one goes in the time capsule.

Patently ridiculous, but acceptable because of the charm of the characters.

Martin is his usual combination of flat cynicism and crazed childishness, indulging in some inspired Jerry Lewis-like clowning with his arms and legs hopelessly out of synch.

An absurd fantasy comedy, based on a dumb premise.

Martin is hilarious as the man who has to cope with a suddenly split identity.

All of Me shows a fine appreciation for the little weirdnesses of life, and with comedies in short supply, it may provide the best shenanigans of the season.

It's a ridiculous story, and the screenplay stuffs it with low jokes and bathroom humor. Yet a number of scenes are sly as well as silly, and director Carl Reiner knows when to inject a little pathos for a change of pace.

His manic thrashing actually hides a very measured and deliberate performance. We can see the twin halves of his body struggling to work in sync, turning a simple walk to the bathroom into a piece of comedic gold.

Audience Reviews for All of Me

The overall plot and sentiment in this film is wonderful, funny, and warm. It would have been a great film if it weren't filled with bodily/bathroom/gross out humor. With that added in like cheese on a pizza, it feels just ridiculous and cliched and slightly annoying at times. I was disappointed.

Steve Martin's teamed with Lily Tomlin in this enjoyable Carl Reiner comedy about a lawyer given a chance to prove his meddle by settling the affairs of a dying and bitter heiress. Altho Tomlin's not given much to work with she does okay with what she gets, and then here is perhaps Martin's finest performance in film.

Pretty cheesy at times, but it did make me laugh out loud at times. This is when Steve Martin actually meant something to me.

The fourth and final collaboration between Director Carl Reiner and Steve Martin might also be their funniest, second only to "The Jerk". Martin play attorney Roger Cobb, who aspires to be made a partner in his law firm but can't give up his passions for playing jazz guitar, and therefore isn't taken seriously by his boss. He's sent to deal with dying eccentric (i.e. rich and weird) client Edwina (lily Tomlin), who's figured out some way to put her soul into her stable hand's daughter's (Victoria Tennant) body when she dies, unfortunately, the guru drops the bowl containing her soul out the window and it hits Cobb on the head as he's walking out the door. All this is of course just an excuse to set Martin loose with some of the best physical comedy of his career, as Edwina controls half his body while he retains the other half. The movie itself may not be very clever (physical comedy and clever rarely go hand-in-hand), but compared to "The Jerk", it's downwright understated. The interchanges between Tomlin and Martin are pretty entertaining, and transition between their inner dialogue (in Cobb's head) and Martin's outer manifestation of Edwina's personality is tightly choreographed. This is probably one of Steve Martin's best comedic performances in what is a very enjoyable movie.

All of Me Quotes