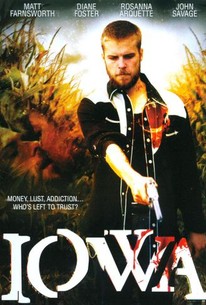 Matt Farnsworth wrote and stars in the independent drama Iowa, which also marks his feature directorial debut. Farnsworth and associate producer/co-star Diane Foster had previously worked on Poor Man's Dope, a documentary about tweaked-out Midwestern methamphetamine addicts and dealers, and that inspired them to make this feature. Farnsworth plays Esper, whose father, a meth addict, dies as the film opens. Esper stands to collect on an insurance policy, but as executor Irv (John Savage) tells him, only if drug tests on his father come back clean. Esper is involved in a serious relationship with Irv's daughter, Donna (Foster), and plans to marry her with or without the money. But Esper's scheming mother, Effie (Rosanna Arquette) has other plans. She's teamed up with corrupt parole officer, Larry (Michael T. Weiss from television's The Pretender), in a vicious plot to get Esper out of the way and collect the insurance money herself. Larry busts Esper and assaults Donna while he's in jail, but Donna finds a way to bail Esper out before Larry can have him killed. Together with their junkie friends, Nick (David Backus) and Dominique (Amanda Tepe), Esper and Donna start up their own meth lab. But Larry is still after Esper, and the methamphetamine business turns out to be more dangerous than any of them had imagined. Iowa had its world premiere in competition at the 2005 Tribeca Film Festival.

A mish-mash of familiar cinematic would-be jolts and shocks that don't convince for a more than a moment or two.

Farnsworth's frenetic, often hysterical first feature tries desperately to find a style, or styles, to call its own, but there's never a moment that doesn't feel as if it's been chewed up and spit out a dozen times before.

There's not much story but there are plenty of colorful, almost David Lynchian drug freakouts.

Matt Farnsworth's low-budget cautionary tale takes a 'drugs are evil' premise and pushes it to the extreme.

This is just stylistic plagiarism, without any sense of self.

Here's a strange, moody movie about "Iowa" that's never going to make to a Chamber of Commerce dinner.

As director, Farnsworth lets tricky visuals run roughshod over dramatic unity, while as a performer, his lack of screen presence makes him seem sullen and uninterested instead of darkly charismatic.

The most unflinching look yet at the meth pandemic that is sweeping across the Midwest as family values are plowed under by modern corporate agri-business.

According to this first-time feature filmmaker, the entire Hawkeye State is a hotbed of crime, corruption and clandestine chemistry, with home-cooked crystal methamphetamine replacing pot roast and Mom's apple pie.

Iowa is so stupendously slipshod that even mentioning the classics it vainly attempts to emulate would be to give it too much credit by association.

I wonder if anybody who watched this movie said Now that brings back memories?! If there ever was a movie on the reasons why you should not do Crystal Meth then Iowa is it.This movie scared the crap out of me & I think if they showed it in high schools or anywhere else across the country I'm pretty sure it would scare people into staying away from meth.This is the perfect Anti-Meth movie