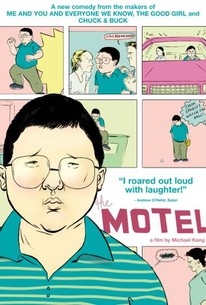 Critics Consensus: A coming-of-age dramedy whose familiar outline is filled in with rewarding empathy and character detail, The Motel marks an impressive feature debut for writer-director Michael Kang.

Critics Consensus: A coming-of-age dramedy whose familiar outline is filled in with rewarding empathy and character detail, The Motel marks an impressive feature debut for writer-director Michael Kang.

Critic Consensus: A coming-of-age dramedy whose familiar outline is filled in with rewarding empathy and character detail, The Motel marks an impressive feature debut for writer-director Michael Kang.

Writer-director Michael Kang makes his feature debut with the coming-of-age comedy, The Motel. Newcomer Jeffrey Chyau stars as Ernest Chin, a chubby 13 year-old Chinese-American boy whose mother (Jade Wu) runs a sleazy motel in upstate New York. The clientele of The Motel are predominantly prostitutes and their johns, which spurs Ernest's budding sexual curiosity. When he's not cleaning rooms, eavesdropping on guests, avoiding the local bully, or tormenting his little sister Katie (Alexis Chin), Ernest harbors a crush on Christine (Samantha Futerman), who works at a nearby Chinese restaurant. Ernest has entered a writing contest at school with a story about his unhappy life at The Motel, and won an honorable mention. His scornful mother thinks his writing is a waste of time, and Ernest doesn't want her to see the story for fear that it will anger her. He's a social misfit, so he's intrigued when Sam Kim (Sung Kang of Better Luck Tomorrow), a Korean-American guest who frequently brings home prostitutes, befriends him. Sam takes Ernest under his wing, teaching him to drive and offering him his wisdom regarding women. Of course, Sam turns out to have his own serious issues with the opposite sex, and his advice to Ernest about Christine may not be exactly what the boy needs. Kang won the Asian American International Film Festival screenwriting competition with his script for The Motel in 2001, and the completed film was shown at the festival in 2005. The script was workshopped at the Sundance labs, where filmmaker Miguel Arteta (The Good Girl) signed on as a producer.

News & Interviews for The Motel

View All The Motel News

Critic Reviews for The Motel

Perhaps The Motel meanders a bit too much -- hard to do in a 76-minute film -- but it is an engaging little movie.

It's a modest triumph of unflattering realism, proving yet again that a camera, a few good actors, the right material and a sensitive director are all you need to illuminate any particular aspect of humanity.

There is honesty and integrity in the filmmaking and the performances, which make The Motel among the best character studies of the year.

A well-worn coming-of-age tale enlivened by pungent detail and a sharp visual sense.

Even if writer-director Michael Kang doesn't exactly break new ground, he imbues his debut with a quiet, compelling inertia that mimics puberty's rudderless drift, its burgeoning desire for something, anything, to change.

A wonderful reminder that adult life is never as difficult as puberty was.

A welcome addition to the "awkward adolescence" genre,

A most impressive feature film debut by writer/director Michael Kang who has crafted a compelling tale by examining rites of passage from a fresh perspective, namely, that of a Chinese-American adolescent.

Each of Ernest's interactions and epiphanies is pure, calculated movieland.

Kang and Chyau make for a great team, with Chyau able to give an honest performance that requires humiliation, but never disrespect.

Audience Reviews for The Motel

A different type of coming of age story features a young Chinese boy who is pushed into depression by his mother while he works in a seemingly dead end motel business. Very charming.

Pretty short and low-budget, but a decent indie flick about a young chinese boy who works with his family at a suburban motel (hence the title). It's a very character-driven story and quite funny in parts. Sadly though, it got kind of dull after a while, as there wasn't much going on. The dialogue is also overly simple and doesn't hold much substance at all. So the only thing that really make this movie worthwhile is its originality, plus the humor bits. A fairly enjoyable watch, but I expected so much more than what I got.

Hilarious and touching, in the vein of Napoleon Dynamite but more human. I really enjoyed this movie and got to meet the producer at a Q&A, she seems pretty brilliant. Chubby Chinese kid coping with emerging sexuality at his family's run-dwon motel.

[font=Century Gothic]In "The Motel," 13-year old Ernest(Jeffrey Chyau) lives and works at a rundown motel managed by his mother, along with his younger sister and grandfather. As far as slice-of-life movies go, it is rather sweet and not bad but it is also so slight that it could be blown away by the first strong breeze. And it is rather precious in making the lead character a writer in training, Ernest having just won honorable mention in a writing contest. Plus, there are a couple of episodes late in the film which happen for no other reason than convenience's sake. Overall, the movie is not about Ernest growing up per se, as it is about his becoming a man.(His father has long since left, which sort of makes him the man of the house.)[/font] [font=Century Gothic][/font] [font=Century Gothic]The motel is symbolic of purgatory. People are constantly passing through, some longer than others, but they are all at the low end of society's register. And it is surprising that Ernest's mother, strict as she is, does not apparently have any compunctions about her children being unsupervised in this environment. [/font]