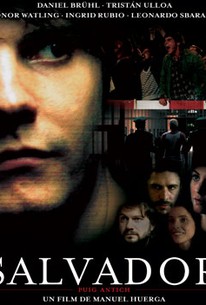 Director Manuel Huerga teams with screenwriter Lluis Arcarazo to explore the life and death of the last man executed by the garrote in this biopic following the life of leftist Spanish bank robber and revolutionary Salvador Puig. The product of a leftist bourgeois household, Salvador (Daniel Bruehl) railed against Franco's oppressive as a young student, and soon turned to bank robbery as a means of contributing to the radical labor movement. When a cop is killed during one of the robberies and Salvador is captured, the trial to determine the young activist's fate is swift. Though Salvador does put some hope into the chance for a reprieve, his grim fate is ultimately sealed when a bomb kills Franco's president. ~ Jason Buchanan, Rovi

Lluis Arcarazo's unfocused script fails in the first half to generate enough sympathy for the charming but irresponsible protag, but then switches gears and piles on the sentiment in pure TV movie fashion once execution time approaches.

Where we should be caught up in the emotion of a man staring death in the face, we are marvelling at the clunky switch from Seventies crime thriller to run-of-the-mill prison melodrama.

There are no featured audience reviews yet. Click the link below to see what others say about Salvador!