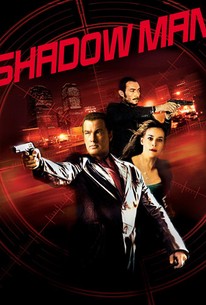 An ex-intelligence officer tricked by rogue CIA operatives into smuggling a deadly virus out of the U.S. unleashes a firestorm of fury on the agents who kidnap his daughter once the mission has been fulfilled in an action-packed tale of international intrigue starring martial arts icon Steven Seagal. Jack Foster (Seagal) is an ex-CIA operative traveling to Europe with his young daughter for what they thought would be a relaxing getaway. When his daughter is kidnapped upon arrival in Europe and Jack realizes that he has become little more than a small pawn in a much larger game, he vows to bring his young girl back home safe and rain vengeance upon those who thought they could use Jack to fulfill their nefarious plot to hijack the planet.

There are no critic reviews yet for Shadow Man. Keep checking Rotten Tomatoes for updates!

Not Seagal's best (Hard To Kill or Above The Law) but certainly not his worst (Half Past Dead seems to take that honor so far). Rates just above decent but somewhere below pretty good in terms of Seagal films.