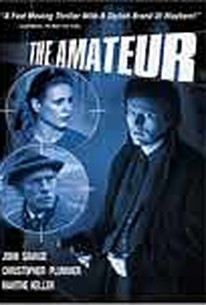 CIA computer technician John Savage seeks revenge for the terrorist killing of his girlfriend. Threatening to make public his insider's information, Savage forces his reluctant bosses to train him in the art of assassination. He then heads into enemy territory (at least, it was enemy territory back in 1982) on a search-and-destroy mission. There is nothing in The Amateur that we haven't seen elsewhere, but Savage and a solid cast of supporting players Christopher Plummer,Marthe Keller, Arthur Hill, Ed Lauter, Nicholas Campbell, Jan Rubes et. al.-- keep the proceedings lively. Robert Littell co-adapted the film's screenplay from his own novel. ~ Hal Erickson, Rovi

Walter Reyer
as Chancellor
View All

News & Interviews for The Amateur

View All The Amateur News

Critic Reviews for The Amateur

After earning our attention with its understated, powerful opening, the movie develops into a routine, even laughable, spy thriller.

...does a professional wet job that should have made more of a cultural imprint than it did....

A slick and suspenseful espionage thriller.

The Amateur has an effective narrative that is superior to other similar movies. [Full Review in Spanish]

Audience Reviews for The Amateur

There are no featured audience reviews yet. Click the link below to see what others say about The Amateur!