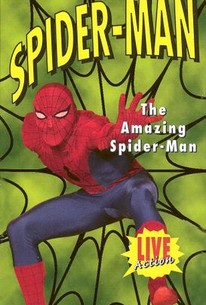 In this TV movie based upon the Marvel superhero, college student Peter Parker suffers a spider bite which turns him into the amazing webbed crime fighter. The plot finds a no-good scientist using mind power techniques in an attempt to pocket big bucks by extorting world leaders. this Swackhamer-produced tale presents some excellent special effects portraying the wall climbing Spider-Man. This was also the pilot for the Spider-Man TV series that would follow.

Critic Reviews for The Amazing Spider-Man

One of the boob tube's biggest calamities, ranking somewhere in between "AfterMASH" and Craig Kilborn.

Audience Reviews for The Amazing Spider-Man

Generally speaking, I love pilots. A well-made pilot can be a beautiful thing- if the director knows how to use a small budget to its best advantage and the script is competent and well structured, a pilot can be on par with a feature film. Just look at the Incredible Hulk, or Terminator: the Sarah Connor Chronicles. To me, the best pilots are entertaining (setting up plot and character naturally) but self contained, resolving an initial conflict of some sort while leaving an opening for a continuation of the story that isn't forced or predictable. On the other hand, you'll notice a startling tendency in pilots to introduce menial, uninteresting conflicts to introduce their characters, or pilots that have mediocre actors that are later phased out when the show becomes a series and/or cheesy effects that get better only later in the show's run (Star Trek TNG being a prime example). As for Spider-Man, pilot of the shot-lived TV show from 1978... well, it has EVERY ONE of the above mentioned qualities, good AND bad, going for it. It's sort of a great relic of seventies television that seems to have some potential to it, but is bogged down by sheer corniness. In this one, Peter Parker, college student and freelance photographer, is bitten by a radioactive spider (ahhh, the days before gene-splicing), and instead of developing leukemia he gains the strength of two or three men and the ability to slowly glide up walls as if he's being lifted by wires. Having been spotted scaling a wall and realizing that he can use the skill to sell pictures to the Daily Bugle, he stitches together a brightly colored costume, constructs an apparatus that fires a web- like substance from his wrists, and decides to fight crime and right wrongs as the Amazing Spider-Man... FOR ABSOLUTELY NO REASON. That's right- there is no Uncle Ben here, no motivation for his sudden ascent into super heroics. He just gets powers and decides to use them to fight crime, 'cause, well, what else is he going to do with them? At the same time, a criminal madman straight out of a James Bond flick is hypnotizing people, forcing ordinary, honest citizens to rob banks and threatening to make ten New Yorkers kill themselves unless the city pays him a ransom. Parker, now decidedly a Super Hero, decides to track the dastardly cur down and stop him. And that's... about... it. What saves this from being a waste of videotape is that, while it lacks in ingenuity, it actually has some good character stuff going for it. Nicholas Hammond, while a little old to play a college student, is actually a pretty decent Peter Parker-earnest and straightforward, he's a nice guy, the kind of guy you'd expect to become a super hero JUST BECAUSE. While he's not any more of a wise-cracker then Tobey Maguire's Spidey, he definitely gets the hard-luck, Charlie Brown image of Pete just right: he suffers from allergies, even when he's Spider-Man, he can't sell a picture to save his life, he's always broke, and he has piss-poor luck with the ladies. Unfortunately, while Parker's on-screen translation comes close to accurate, the other characters from the comics are a little more flat. David White's J. Jonah Jameson, rather than seeming like a gruff but funny thorn in Pete's side, is instead presented here as a full-blown asshole, insulting and condescending Peter left and right and never displaying so much as a single redeeming quality. Hilly Hicks is a little too excitable and a little too hip for the level-headed Robbie Robertson, and Jeff Donnell is there and gone as the stereotypical Aunt May. We also get Michael Pataki as a cigar-chomping cop who has a problem with Peter's convenient appearances at the scenes of crimes; the funny thing about him is, if you gave him a mustache and a buzz-cut, he would have made a great J. Jonah Jameson, but as a cop, he's just annoying and clichéd. Speaking of clichés, the Bond-reject villain of the piece, as played by Ivor Francis, is a subversive New-Age guru (in a suit) who hits all the typical villainous marks. He serves his purpose- namely, to give Spidey someone to go after while he crawls aimlessly up and down the same wall over and over again, and to hire samurai bodyguards to try to beat Spidey with bamboo sticks if he ever gets off said wall. The direction is pretty cut-and-dried; no style, no flair, just medium and close-up shots (with that annoying tendency to zoom from the seventies) set in flat lighting (the dullness of which does make Spidey's bright, colorful costume pop against the drab sets). The effects are laughable, but hey, it wasn't just 1978, it was TELEVISION in 1978... what are you expecting, Jurassic Park? Despite its plethora of failings, Spider-Man is a moderately enjoyable pilot, a toothless 70's crime thriller with a wall-crawling hero and a surprisingly springy sense of humor at times. Just don't go in expecting Superman the Movie- heck, Incredible Hulk had this one beat by a mile. If you have a high tolerance for corn, though, you might just like it.