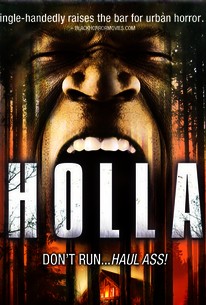 Monica St John, star of the popular sit-com "Baby Gurl" and six of her closest friends stuff into her SUV and head for a weekend escape at Camp Diamond Creek, a remote cabin in the mountains. Along the way, the gang spots Monica's boyfriend Dwayne's ex-con cousin Troy hitch-hiking and reluctantly picks him up. As the gang arrives at the cabin, Monica's agent also arrives uninvited with his date hoping to convince Monica to renew her contract. Soon after the gang settles in, Dwayne proposes to Monica and the gang plans a small celebration. Troy is sent for a bottle of champagne from the kitchen. While away, a news story implicates Troy in connection with a brutal murder. Dwayne tries to reassure the gang that Troy isn't capable of murder. Just as Dwayne professes Troy's innocence, the lights go out and folks start dying. Is it Troy the convict, Greg the agent, Dwayne the boyfriend, or one of the "hater" friends? Who knows. . . who's next?

Tommy Morgan
as K.D.
View All

Holla works best when the comic and horror elements work together in an engaging, borderline madcap mystery.

Watch out! A serial killer's on the loose with Jungle Fever.

There are no featured reviews for Holla at this time.