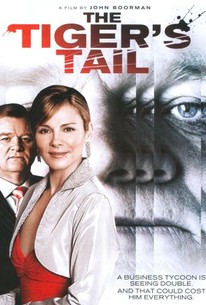 "The Tiger's Tail" is a black comedy thriller about a successful businessman in contemporary boom-time, "Celtic Tiger" Ireland, whose life begins to unravel when he encounters his doppelganger. The film tells the story of Liam O'Leary an Irish property developer of humble origins who has made it big and fast on the back of the Celtic Tiger. His hubris has led him into a scheme to build a national stadium but a rival developer has connived to thwart his plans. Wildly over-extended, Liam finds himself struggling in a receding market. Stressed and over-stretched, he seems on the verge of a mental breakdown, to his horror, he sees his DOUBLE. Is this a harbinger of his death? His neglected wife, Jane is distressed by his erratic behavior and treats his claim to have seen his Double as a hallucination. He confronts his Double and discovers a shocking truth that makes him ask the question "Who Am I?"

Eanna MacLiam
as The Beggar

Frank Gleeson
as The Double's Double

Critic Reviews for The Tiger's Tail

The Tiger's Tail, like Cassandra's Dream, prominently features a boat that is both symbol of financial attainment and emotional ruin; it also finds a master filmmaker defying the "show, don't tell" principle with almost crippling cynicism.

John Boorman's tale of doppelgängers in Dublin would like very much to spook us, but keeps tripping over its loose script and bizarre plot lines.

As tigers go, it's all growl and no teeth.

Any potential in Boorman's sinister parable is frittered away with awkward dialogue, shallow characters and failed attempts at comedy. A curiosity at best.

The fanciful tale is too absurd to take seriously.

A messy but absorbing mystery.

The world recession has made this suspenseful film bitingly relevant beyond the local problems of the maiming of "The Celtic Tiger."

A real waste of a potentially interesting premise.

If there's anything about the movie that really rises above the mediocre, it's Gleeson's fantastic performance.

An almost madcap comic pace battles with thundercloud-building drama . . . The social commentary can be earnest and bald, with the mythic overtones seemingly contrived to tumble O'Leary into the class gap on his arse.

Far from being a roaring, sinewy beast with a lot of bite that the title might suggest, John Boorman's latest has more in common with a lumbering white elephant.

Audience Reviews for The Tiger's Tail

"The Tiger's Tail" starts in the middle of a massive traffic jam that has Liam O'Leary(Brendan Gleeson, great in a dual role) who is on his way to accept an award. This is happening just as his bid was denied to build a soccer stadium and as he is possibly losing his mind when he spots a mirror image of himself walking in the road. He turns out to be real when he accosts Liam in a bathroom, giving some unnerving news that sends him first to his mother(Moira Deady) and then to his older sister Oona(Sinead Cusack) who in reality gave birth to him when she was 15 in London where she left behind his twin. "The Tiger's Tail" is a daft concoction with possibly the mother of all midlife crises that while unpredictable does also tend to rely on the odd contrivance to keep the story moving. As grounded as the movie is, it might also have been interesting if it had taken a supernatural approach. What it is concerned with is identity in a country where there is a huge disparity between rich and poor, like everywhere else. Since this is Ireland, the subject of the divided country lies just beneath the surface. As far as the divided man goes, the double thinks Liam's life could have been his but then Liam is pretty much a self made man.

I got really into this movie, even though it wasn't that great. Go figure. I got really annoyed at the doppelganger. :P