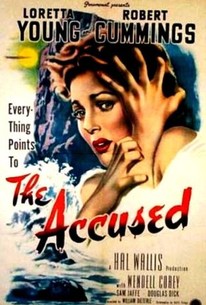 The Accused is a mystery melodrama with a predictable plot involving blackmail, attempted rape and murder. Wilma Tuttle Loretta Young is a school teacher who is assaulted by a student, Bill Perry (Douglas Dick), and, while defending herself, kills him with a tire iron. Frightened, she attempts to make the murder look like an accident. Wilma, despite the fact that she acted in defense, feels increasingly guilty about her actions. Wilma is further conscience stricken when she falls in love with the student's guardian, Warren Ford (Robert Cummings). Despite a good performance by Wendell Corey as a police investigator, The Accused is a rather predictable, routine melodrama, directed without any particular distinction by William Dieterle.

Critic Reviews for The Accused

A good and unusual noir in a decent special edition blu-ray from Kino Lorber Studio Classics.

Wendell Corey's copper is both a heinous and a ridiculous character, but everything else clicks.

If The Accused is ultimately of its time, it also attempts to stretch beyond it. While not exactly a progressive film, it nevertheless grapples with assault, victim-blaming, and women existing within a deeply patriarchal culture.

Dour and rather dullish but well-acted psychological crime drama.

Audience Reviews for The Accused

There are no featured audience reviews yet. Click the link below to see what others say about The Accused!