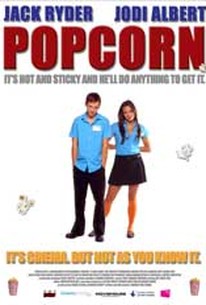 Writer-director Darren Fisher's innuendo-laden romantic comedy Popcorn unfurls entirely within the confines of a British multiplex known as "Moovieworld," where 19-year-old Danny (Jack Ryder) accepts a job with the intention of wooing and winning over usherette Suki (Jodi Albert) - little realizing that it is her last day at the theater. Faced with a very short amount of time in which to act, a desperate Danny cooks up a host of wild schemes designed to catch Suki's attention. He is assisted in his pursuits by fellow worker and consummate movie addict Zak (Luke de Woolfsoon) who vows to teach him the tricks of the trade as illustrated in various romantic movies. Meanwhile, theatrical manager Kris (Andrew-Lee Potts) learns of a "management plant" at the theater making a bundle by reselling old tickets, and decides to reel in the culprit, red-handed. ~ Nathan Southern, Rovi

Emily To
as Extra

John A. Pollard
as Extra

Joseph B. Dairo
as Extra

Peter Newman (I)
as Extra

A well-meaning British comedy that fails to deliver the laughs - or the romance.

The budget is equal to that of an episode of Hollyoaks - and it has pretty much the same cast too, so the acting is not great. And yet, someone knows what they're doing. It's surprisingly well-written (with like sub-plots and everything), and it has a definite Edgar-Wright-ness to it. Lower your expectations and it's a decent 90 minutes.