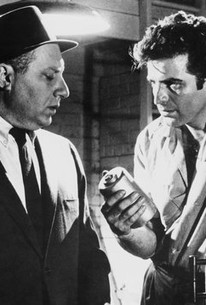 Fairly fast-paced, with only a lull here and there, this standard thriller by director Irving Lerner was one of his most successful films. It stars (Vince Edwards) as Vince, an escaped convict who grabs a metal vial from the prison's hospital before he makes his break. He thinks it is his ticket to the easy life because it contains heroin. Instead, the vial contains radioactive cobalt that could first sicken and then kill anyone who comes in close contact with it. The police are caught between the devil and the deep blue sea. If they publicly announce a vial of deadly cobalt is on the loose, in the hands of an escaped convict, they might touch off a stampede. On the other hand, if they keep it a secret, who knows how many people will die.

Critic Reviews for City of Fear

It's not touching. The premise is so attractive, but Columbia and Irving Lerner put it up with a total absence of emotion, tension or charisma on the part of the actors. [Full Review in Spanish]

Audience Reviews for City of Fear

There are no featured audience reviews yet. Click the link below to see what others say about City of Fear!