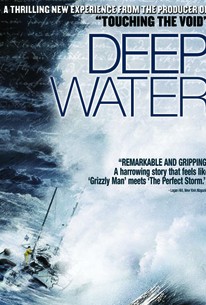 Critics Consensus: Equal parts mystery and biography, Deep Water is both an engrossing documentary and an affecting treatise on human folly and obsession.

Critics Consensus: Equal parts mystery and biography, Deep Water is both an engrossing documentary and an affecting treatise on human folly and obsession.

Critic Consensus: Equal parts mystery and biography, Deep Water is both an engrossing documentary and an affecting treatise on human folly and obsession.

Co-directors Louise Osmond and Jerry Rothwell's historical documentary Deep Water chronicles one of the most infamous nautical tragedies of the past several decades. In autumn 1968, Britisher Donald Crowhurst, the proprietor of a down-and-out manufacturing business for marine electrical components, avowed to enter the first Golden Globe sailing competition -- a nonstop, one-man circumnavigational race against eight other competitors. In financing the boat via a deal with English entrepreneur Stanley Best, Crowhurst used his house as collateral. Relinquishing the voyage, or failing to complete it, would thus have instantly rendered Crowhurst homeless and driven his family into Chapter 11. But the voyage was doomed from the start: Crowhurst failed to finish building the craft prior to his October 31st departure, but set sail just the same, and thus sealed his own grim fate. Indeed, two weeks after Crowhurst sailed out of Devon, the boat began to leak substantially; recognizing that a trip into the Southern Ocean could spell disaster, a desperate Crowhurst radioed home with indications of phony distances and falsified his logbook; he then made an illegal pit stop in Argentina to repair the boat, and joined up with the rest of the competitors on the opposite side of Cape Horn, in the Atlantic. When Robin Knox-Johnston won the overall competition, Crowhurst and Nigel Tetley went head-to-head to win 5,000 pounds for the fastest voyage; Crowhurst recognized that a victory would yield scrutiny of his logbooks and unveil his deceptions to the world; he thus intended to preserve his reputation by coming in second. He didn't count, however, on Tetley's boat capsizing -- which led to Crowhurst's own victory. Foreseeing disaster, Crowhurst decided to end his life by drowning himself. In telling Crowhurst's sad story, Osmond and Rothwell intercut narration from Crowhurst's journals, archival film, and interviews with the sailor's family, friends, and colleagues. What emerges is a portrait of a man sinking rapidly into a pit of despair as he comes face to face with his own darkest nightmares of personal failure. ~ Nathan Southern, Rovi

No Country for Old Men, There Will Be Blood Top Critics’ Lists in Toronto, San Diego, Austin
Critical Consensus: Champ Is No Chump; Nanny Is Dire, Bean is No Holiday, Dawn Needs Rescue

The details just get stranger and stranger.

As directed by Louise Osmond and Jerry Rothwell, the movie breezes along at a highly watchable clip, thanks to fluid, affecting intercutting of archival, black-and-white footage and present-day interviews.

The film evokes a visceral understanding of solitude at sea.

Some beautiful shots give unexpected texture to the film, such as an underwater capture of a boat from below, with prisms of light surrounding it. And its final image is a quiet heartbreaker.

For this gripping and amazing documentary, such truth emerges not just from the facts, but also the poetry of men who redefine themselves in a risky race on small sailboats.

Deep Water is a stunning documentary that not only beautifully elucidates a nearly forgotten incident but touches on crucial themes involving isolation, sanity, self-worth, impossible dreams, the nature of heroism and limits of human endurance.

I do think the movie loses focus at times, but nevertheless, this is a pretty interesting story into madness.

Knowing in advance how it all turned out cannot rob this remarkable movie of any of its drama, although ignorance of the events probably adds to the kick.

As a portrait of obsession, competition and, finally, delusion, Deep Water is haunting and engrossing, and one of the best nonfiction movies of the year.

This is fascinating stuff... that would be better served by a magazine article or book.

Deeply researched and compellingly presented, Deep Water is as much about one man's misadventures on the ocean as it is about loneliness, desperation and the danger of dreams.

Deep Water is one of the poignant documentaries that I have seen. This film tells the true story of Donald Crowhurst, and Englishman who risked everything in a circumnavigational race around the world. Crowhurst was near bankrupt and needed the winnings of the race to save himself. Deep Water is a flawless documentary and one of the best documentaries in recent memory. This is a true, courageous story, one that is also foolish, but one that also should be admired because of the will Crowhurst had to do everything to save his family. Deep Water is a great sailing documentary about a spectacular race, a true story that is captivating even though it is suicide. I loved this film, thought it was a powerful film from start to finish. If you enjoy a great documentary, then this is the perfect film for you to watch. A flawless film that tells a great story, Deep Water is truly a unique documentary. Brilliantly paced and directed, Deep Water looks at Crowhurts attempt and ultimate failure in attempting the race. The human emotion in recounting the decisions behinds Donald Crowhurst's failed race attempt is apparent, and it adds so much to this documentary. A brilliant, sad documentary Deep Water is a film that must be seen. This a great film from start to finish, one that tells a poignant story about a man who risked everything, and ultimately lost everything.

a fascinating documentary on the first nonstop singlehanded sailing race around the world, the sunday times golden globe race held in 1968-69, before gps and most satellite communications. the race was open to all comers regardless of experience. what started as a grand adventure ended tragically for most of the 9 contestants. if u don't know this heartbreaking story already i don't want to spoil it so enough said.

Documentary about first solo, non-stop boat race around the world. I expected a more mechanic how-they-did-it approach to the film, but instead it ended up focusing on the psychological toll it took on the sailors. It ended with a haunted chill. Good stuff.

A superb film. A documentary, by it's very nature, can only be as good as the story it has to tell, and this one's a cracker. "Deep Water" raises the bar higher than the likes of "Touching the Void" by it's sheer wealth of contemporary footage and audio material. Donald Crowhurst was a peculiarly British type of Boys-Own adventurer. He may have sought to deceive but he paid the ultimate price for doing so, and this film is a fitting tribute to it's flawed hero.