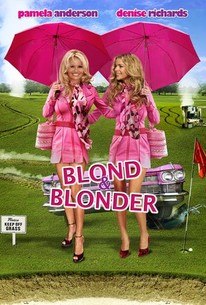 When two dim-witted blonde bombshells are mistaken for the underworld's most cunning assassins, they are approached with a lucrative contract to take out the head of the Chinese mafia in a globe-trotting, air-headed comedy starring Pamela Anderson and Denise Richards. Two fair-haired beauties have just witnessed a high-profile mob hit, and now the Godfather is convinced that they have what it takes to rub out his most fearsome rival. After accepting a hearty payout and agreeing to carry out the dangerous assignment, the two brainless beauties hit the open road on the adventure of a lifetime.

Emmanuelle Vaugier
as The Cat

Meghan Ory
as The Kit

Anna Williams
as Suzan
View All

News & Interviews for Blonde and Blonder

View All Blonde and Blonder News

Critic Reviews for Blonde and Blonder

Already a contender for worst film of the year.

I doubt I have seen a film as bad at this the entire decade! I sure hope I won't see a film worse than BLONDE AND BLONDER this year!

No brains are required to watch this comedic romp about two dumb blondes who accidentally become involved with the mob and elusive killer The Cat.

Boy, this is the last time I listen to my penis for movie selection advice...watching Anderson and Richards squirm, shimmy, and squeal their way around this stinker is enough to make one give up on the dream of overinflated, untalented starlets forever.

Audience Reviews for Blonde and Blonder

vaguly amusing but what do yuo expect from pamela anderson, its ok watchable i guess

Oh dear, is all I can say! Well quite honestly I didn't get this out expecting anything amazing - a few cheap blonde jokes, which are definitely there. My main gripe with it is that Pamela and Denise are just too old for this type of thing (although Denise does scrape through with a bit more dignity than Pam!), and the whole mistake identity and assassin story line was just pointless. It would have worked better just as a silly comedy, dumb blondes doing dumb things. Romy and Michelle was WAY better.