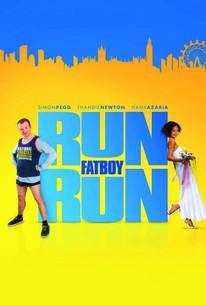 An overweight man leaves his fiancée on their wedding day, only to realize years later that she's the one and only woman of his dreams in a romantic comedy that reunites Big Nothing co-stars Simon Pegg and David Schwimmer, this time with Schimmer in the director's chair. It's not easy to win back a woman after leaving her at the altar, but when an out-of-shape man finally realizes just what a mistake he's made, he vows to run a high-profile marathon in order to convince his ex-fiancée that the rich and handsome man she's about to marry isn't the guy for her.

Nevan Finegan
as Mickey
View All

The film jogs along uncertain whether it is aiming to be an episode of Friends or a Farrelly brothers farce. Overrun with fart jokes, it is fitfully funny and hamstrung by a sentimental and implausible plot.

This feeble premise limits the movie to perfunctory gags about the hero's sloth and some canned underdog drama.

Run, Fatboy, Run winds up being as immature and exhausting as its protagonist.

Schwimmer's sliced cheese mediocrity gets him off the hook; not so for the usually inventive Pegg and Black and their arms race of bland jokes and cheap male nudity

Sure it's predictable. Sure it's a slight effort, but I still think it's pretty funny and charming.

It comes as no surprise that the film is simply terrible.

A predictably puerile plod along a road we've all been down before. Runs out of puff well before the big race.

An enjoyable, even heartwarming little movie that embraces its clichés and never lets them get in the way

Much of the comedy left me cold.

Disappointingly, Run, Fat Boy, Run is an unsatisfying hybrid not funny enough to be a true comedy, and not serious enough for a drama.

Average comedy, nothing special, none offensive and kind of a waste of time.

That Indian guy was truly funny.

Pegg, now a bit of a typecast, always wins me over with his average man of the street hilarity, and his down to earth lovable, puppy dog temperament. Not only was this film original and funny, but also a lesson in how much love can truly heal.